G6PD deficiency is an inherited disorder where the red blood cells are destroyed (hemolysis) by toxic compounds that form in the body under certain conditions.

What is Glucose-6-phosphate dehydrogenase Deficiency?

G6PD deficiency is a fairly common disorder that affects several people worldwide. It is more common in Africa, the Mediterranean, Middle East and Southeast Asian regions.

What are the Causes of G6PD Deficiency?

G6PD deficiency occurs due to mutations in the G6PD gene, which encodes for the G6PD enzyme. The G6PD gene is located on the X chromosome. The mode of inheritance is X-linked recessive. The symptoms of G6PD deficiency manifests more commonly in males, while females can be silent carriers of the disease.

There can be several types of mutations associated with reduced G6PD enzyme activity. The most common variant is the A-type seen in Africans and results in a milder form of hemolysis. The other variant is the Mediterranean type characterized by severe enzyme deficiency and associated with severe hemolysis that may result in death unless the condition is recognized promptly and the person given an urgent blood transfusion. 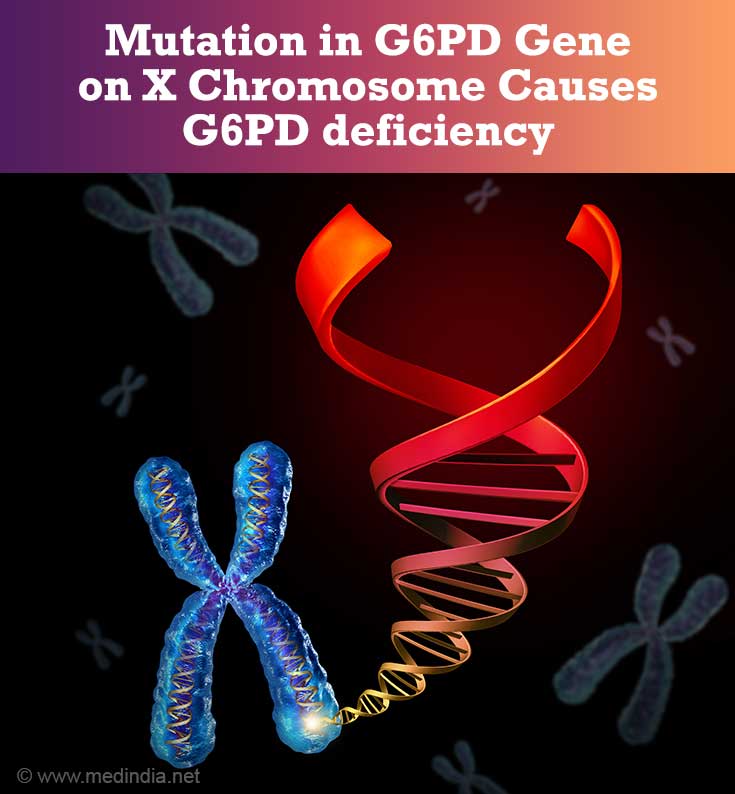 How does a Hemolytic Crisis occur in G6PD deficiency?

Normally, when a person develops infections, fever or other stressful conditions, certain toxic chemicals called reactive oxygen species are generated that can cause damage and breakdown of red blood cells. This is prevented by protective compounds (produced by normal G6PD enzyme activity) which neutralize and remove the toxic compounds produced in the body during such situations. 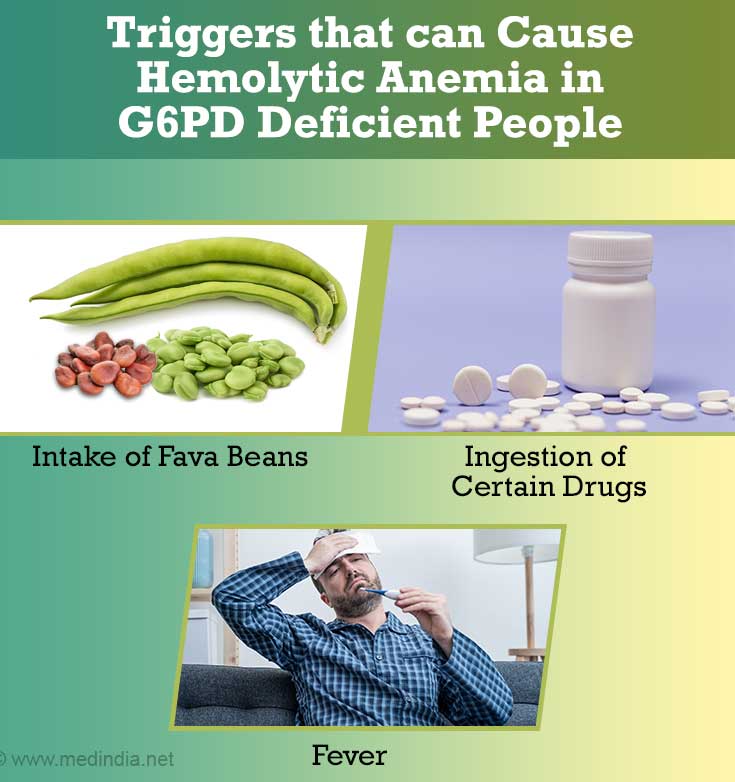 If the condition is not recognized promptly and blood transfused immediately, it may sometimes result in death.

What are the Symptoms of G6PD Deficiency?

The clinical features of G6PD deficiency include varying severity of hemolytic symptoms (see above) depending on the degree of G6PD deficiency. The hallmark of the condition is sudden hemolysis following the intake of a drug, fava beans, or conditions like fever or infections resulting in anemia, jaundice and hemoglobinuria. Most persons have only mild hemolysis. Severe life-threatening hemolysis is fortunately rare. The clinical features may also include: 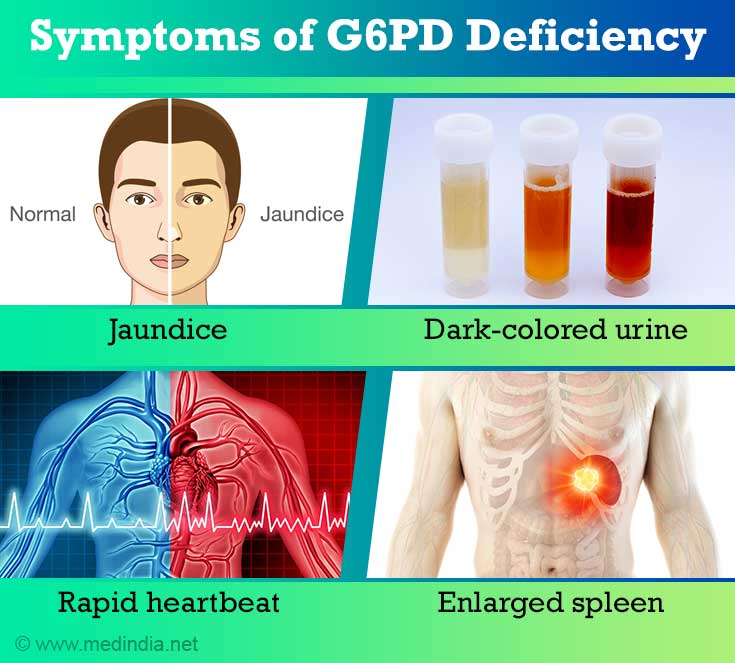 The following drugs can cause hemolysis in a patient with G6PD deficiency and should be strictly avoided:

Exposure to mothballs containing naphthalene should also be avoided.

How to Diagnose G6PD Deficiency?

The diagnosis of G6PD deficiency is based on the following:

The diagnosis of G6PD deficiency may be made from a careful drug and food intake history with symptoms of jaundice, tiredness and passing dark colored urine following ingestion of certain drugs or foods. Previous history of such episodes may also be reported. The patient is normal between episodes. Details of the ethnicity (especially for patients of African or Mediterranean origin) may be a valuable clue.

Examination of a stained blood film under the microscope may show abnormal broken red cells (hemolytic RBCs). Special stains show denatured hemoglobin within red cells (Heinz bodies) and increased immature red cells (reticulocytes) due to formation of new red cells (erythropoiesis) by the bone marrow as compensatory response. If the abnormal cells have the appearance of a bitten piece they are termed bite cells. 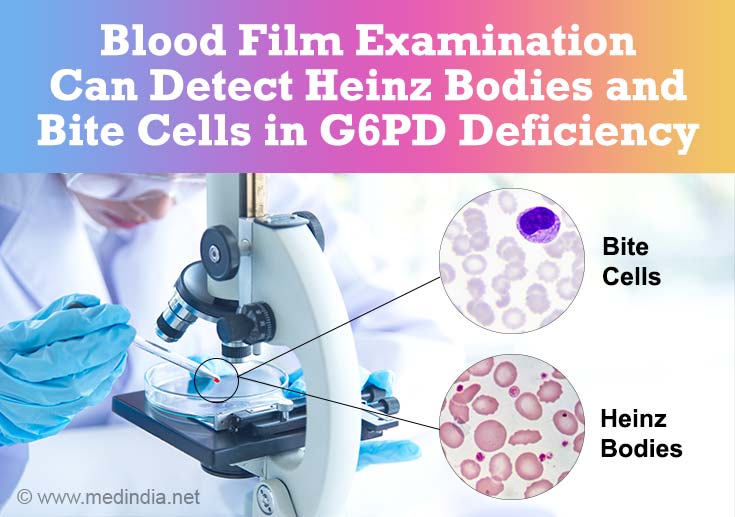 Several screening tests are available that demonstrate the decreased capacity of G6PD deficient cells to reduce dyes. The enzyme can also be directly assayed.

How to Treat G6PD Deficiency?

Unlike other causes of hemolytic anemia, splenectomy will not be useful in G6PD deficiency.

How to Prevent G6PD Deficiency?

The important thing is to avoid triggers such as foods and drugs known to precipitate hemolysis.

Hemolytic Anemia
Hemolytic anemia, also known as hemolysis, is a condition where the destruction of red blood cells outpaces its production. It occurs both in infants and adults.

Anemia
Anemia is a condition in which the red blood cell (RBC) count or hemoglobin is less than normal.

Test Your Knowledge of Blood and Blood Disorders
Blood is a vital part of any living animal. It circulates through the whole body and is an essential channel of communication between the different organs. It supplies nutrients, oxygen and hormones to different parts and removes waste products, ...
Sign up for Wellness Consult a Doctor Sign up for Selfcare
Advertisement
Health Topics A - Z
A B C D E F G H I J K L M N O P Q R S T U V W X Y Z