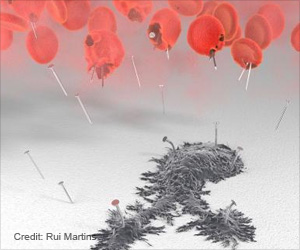 Hemolysis is the breakdown of red blood cells, such as those afflicted with sickle-cell disease, malaria and sepsis. Hemolysis affects millions of people worldwide. These patients face an unprecedented risk of death from bacterial infections and the mechanism for this has remained unclear until now.

In the latest edition of Nature Immunology, Sylvia Knapp's Group at the CeMM Research Center for Molecular Medicine of the Austrian Academy of Sciences and the Medical University of Vienna, uncovers the molecular mechanisms that explain how hemolysis escalates the risk for infections.

Cardiologists are aware that hemolysis is not uncommon during cardiovascular surgery, resulting in elevated circulating levels of cell-free oxyhemoglobin (FHb).
Advertisement
‘Quinine, which is clinically used to treat malaria could be the new treatment approach to protect patients with hemolysis from infections.’
Tweet it Now

This study puts to rest the old belief that iron availability favors bacterial infections in hemolytic disorders, and moreover reveals a new treatment approach to protect patients with hemolysis from infections.


For decades, iron has been considered the prime suspect responsible for the high rate of bacterial infections in patients with hemolysis (bursting of red blood cells). Iron is the element, which gives red blood cells their color and moreover, iron has long been established as an essential nutrient for bacteria. Taking that into consideration, the traditional hypothesis predicted that since hemolysis leads to the release of iron-containing heme, the threat of serious bacterial infections in these patients was attributed to the excess availability of circulating iron (heme).

Sepsis is a life-threatening complication in which the molecules that the body releases to fight an infection trigger widespread inflammatory responses.
Advertisement
A research group led by Sylvia Knapp, Director of Medical Affairs at CeMM and Professor of Infection Biology at the Medical University of Vienna, was able to refute this conventional way of thinking. They revealed that heme was not only failing to act as a willing nutrient to bacteria, heme was instead paralyzing the very innate immune cells sent to protect the host from the bacteria.

"Using in vitro and pre-clinical models, we could clearly demonstrate that heme-derived iron is not at all vital for bacterial growth," explains Rui Martins, PhD student at CeMM and the Medical University of Vienna, and the first author of the study. "In contrast, we found that heme acts on macrophages, the most significant immune cells that are required for mounting an antibacterial response, and it furthermore prevented these cells from eliminating bacteria."

The scientists discovered a completely unknown mechanism: The heme molecule interfered with the cytoskeleton of macrophages and thereby immobilized them. Describing the effect of heme, Martins explains further: "Heme causes cells to form numerous spikes, like hair standing on end and then "stuns" the cells within minutes. It is reminiscent of a cartoon character sticking his finger in an electrical outlet."

The cytoskeleton is crucial for the basic functions of macrophages. The cytoskeleton consists of long, branching filaments that act as the cell's internal, highly flexible and mobile framework. Through targeted build-up and breakdown of these filaments, phagocytes can move in any direction and 'eat' invading bacteria. However, this requires a finely tuned signaling program in which the protein DOCK8 plays a central role. "Through chemical proteomics and biochemical experiments, we discovered that heme interacted with DOCK8, which led to the permanent activation of its downstream target Cdc42, with deleterious effects", explains Sylvia Knapp, the senior author of the study.

In the presence of heme, the cytoskeletal resilience is lost, as filaments grow rampant in all directions, resulting in macrophage paralysis--in other words, the cells lose their ability to shape-shift and can no longer chase down and 'eat' the invading bacteria. The resultant impact is that bacteria can multiply virtually unrestricted.

The loss of cytoskeletal resilience results in life-threatening conditions for millions of people worldwide, which suffer from hemolysis due to systemic inflammation (sepsis) or disorders such as sickle-cell disease, or malaria. In the recently published study, scientists led by Sylvia Knapp, were not only able to clarify the molecular effect of heme on macrophages but moreover discovered that an already available medication can restore the functionality of affected (paralyzed) macrophages. "Quinine, which is clinically used to treat malaria and is suspected to bind heme, blocks the interaction of heme with DOCK8 and thereby improves the outcome from sepsis", says Sylvia Knapp.

"This is very promising. We conclusively demonstrate that it is indeed feasible to therapeutically "protect" immune cells and to restore the body's immune defense against bacteria in hemolytic conditions."

Patients with sepsis had an absolute increase in late death compared to the patients admitted to the hospital with a non-sepsis infection.
Advertisement

G6PD deficiency is an inherited disorder where the red blood cells are destroyed (hemolysis) by toxic ...

HELLP syndrome is a rare but serious complication that affects pregnant women. If detected on time, it can be ...