Your Prescription: The Great Outdoors 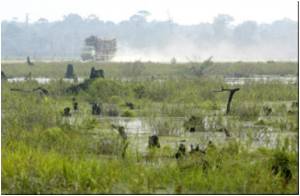 According to a series of studies published in the June 2010 issue of the Journal of Environmental Psychology, sense of increased vitality exists above and beyond the energizing effects of physical activity and social interaction that are often associated with our forays into the natural world.

Bob Dylan has urged kids to give up their gadgets and spend more time outdoors.
Advertisement

"Nature is fuel for the soul, " says Richard Ryan, lead author and a professor of psychology at the University of Rochester. "Often when we feel depleted we reach for a cup of coffee, but research suggests a better way to get energized is to connect with nature," he says.


The findings, adds Ryan, are important for both mental and physical health. "Research has shown that people with a greater sense of vitality don't just have more energy for things they want to do, they are also more resilient to physical illnesses. One of the pathways to health may be to spend more time in natural settings," says Ryan.

All Work and No Place to Play- Fear of the Outdoors

Kids and adolescents in Australia are so scared of the outdoors that it has restricted them to hang out in shopping centres, play computer games or go to school, according to a new survey.
Advertisement
To reach the conclusion, authors conducted five separate experiments, involving 537 college students in actual and imagined contexts. In one experiment, participants were led on a 15-minute walk through indoor hallways or along a tree-lined river path. In another, the undergraduates viewed photographic scenes of buildings or landscapes. A third experiment required students to imagine themselves in a variety of situations both active and sedentary, inside and out, and with and without others.

Two final experiments tracked participants' moods and energy levels throughout the day using diary entries. Over either four days or two weeks, students recorded their exercise, social interactions, time spent outside, and exposure to natural environments, including plants and windows.

Across all methodologies, individuals consistently felt more energetic when they spent time in natural settings or imagined themselves in such situations.

Warning! Your Home's Air Quality Could Be Very Poor!

One may crib about the pollution outside and prefer to stay inside the four walls of the home, but even this may not be a good idea, for researchers say that indoor air quality has
Advertisement
<< Coming Soon: Clothes That Can Provide Emotional Relief
Treatment Success in Sleep Apnea Patients may be Predicted ... >>