Young Spaniards Flee to London With No Work At Home 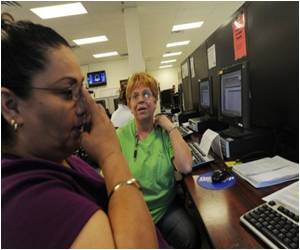 Young Spaniards forced to leave home by crippling unemployment, are attracted to London by the prospect of work and the chance to learn English -- but often run into a fresh set of problems.

While debate is raging in Britain about newcomers from eastern Europe, this group has arrived almost unnoticed.

If they are unemployed or work part-time, people in end-stage kidney failure in need of a kidney transplant are much less likely to be placed on a waiting list for a new kidney.
Advertisement

More than 51,000 Spaniards, most of them under the age of 34, made the journey north to Britain last year, making them the second-largest group of arrivals behind the Poles.


"Over the past two years there has been a huge increase in the number of Spaniards who have come to find a future and also to learn English," says Eduard Manas, president of the London branch of the Barcelona football supporters club.

The immigrant-heavy Stockholm suburb where riots have raged for five straight nights, behind the well-kept lawns and flowerbeds of Husby, unemployment is fuelling despair among the young residents.
Advertisement
Unlike their eastern European counterparts, they are mostly transient, hoping to take advantage of the relatively good prospects in Britain until things improve back home.

Youth unemployment is almost 55 percent in Spain, which is only slowly emerging from the disaster wreaked by the implosion of a decade-long property bubble in 2008.

Manas, who has been in Britain for 15 years, says most new arrivals are aged between 20 and 30, "with good training but without work in Spain".

This was the situation facing Digna Pilar Blanco Gonzalez, an economics graduate from Galicia who came to London in March 2012 after spending two months fruitlessly sending out CVs back home.

The 32-year-old quickly found work in a London hotel, which she juggles with a job looking after two English children.

"I started by cleaning the rooms, like all those who can't speak English," she says. Gradually, she was given more tasks including washing and cooking.

"I am now only in the kitchen, hopefully I'll never have to do cleaning again."

Whatever their training or education, new arrivals who cannot speak English are frozen out of good jobs and often end up working in hotels and restaurants.

Often, though, acquiring the language itself is the goal, making London the preferred destination above other European cities.

Joana Sala Treig and Marc Serres Recorda, a couple from Barcelona, arrived in the British capital last October before finding work in a bar in Picadilly Circus.

Treig, 22, is a qualified teacher and her boyfriend is trained in audiovisual production, "and in both cases we need English to succeed in our careers."

"I do not have much hope to work in my field because of my poor level of English," says 23-year-old Recorda.

Where language is not such a barrier, London can offer different opportunities to Spain.

Ulises Lopez, a 27-year-old artist from Alicante, works as a freelance cartoonist and is grateful for the openings offered by London's vibrant cultural scene.

"I've made cartoons, I've illustrated books and am currently working on African scarves," he says.

The new arrivals delight in London's dynamism and cosmopolitan character, but also point to its high costs.

While Lopez has the financial support of his partner, a shoe designer for a large fashion house, he admits to having to hunt down bargains in the supermarket.

"What is negative in London is that everything is very expensive: transport, accommodation," adds Gonzalez.

"Simply to come here and survive one month is already huge. I have other friends who did not manage."

For her the only solution is to work relentlessly. With two jobs, she rarely has a day off, although this allows her to "live comfortably".

Lopez believes he and his partner will not be able to settle in Britain unless they both find well-paid jobs -- such as that landed by Maria Teresa Turrion Borrallo, a Spanish nanny recently employed to care for baby Prince George.

According to a new study adults who had parents who struggled with addiction, unemployment and divorce are 10 times more likely to have been victims of childhood physical abuse.
Advertisement
<< Dog Ownership Helps Families of Autistic Kids
Eating Chocolate may Help Avoid Fight With Spouse: Study >>