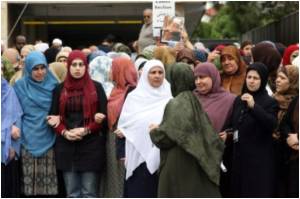 When they join their country's main advisory body early next year, Saudi Arabia's women will be separated from men by a screen.

The move to allow women to join the advisory body has been deemed as a major step for women's rights in the country.

They will, however, only be able to debate with their male colleagues via an internal communications system.


Saudi Arabia's King Abdullah bin Abdulaziz confirmed female members will be able to attend the 150-member Shura Council from early 2013, which act as formal advisory body to the King.

Hair loss or Alopecia can be emotionally devastating to women but understanding reasons behind hair loss can help in prevention and treatment of hair loss.
Advertisement
According to the Daily Mail, it is not yet clear how many women will be allowed to join the assembly, but the oil rich country is taking steps to improve the rights of women in the country.

Segregation between men and women in the country is widespread due to the ultra-conservative Wahhabi sharia law.

Restrictions on women in the country mean they are not allowed to drive, they must use separate entrances at banks and offices, and a plan to build a city for female workers only has been announced, the report said.

From 2015, it was announced by the king that women will be able to stand in the country's municipal elections, and while this move has been praised by the human rights groups, restrictions will still apply to women.

Are Menopause Symptoms Troubling You?: Try these Options
View all
News Archive
News Resource
Advertisement
News Category
New Technology can Help Older Women Stay Active and Healthy Why Does a Woman's Brain Change After Menopause? Enjoy Your Breastfeeding by Choosing a Comfortable Feeding Bra Abortions Hit a Record High During Covid in UK: Report High Leptin Levels may Up Lifelong Heart Disease Risk in Mom and Baby
More News
Sign up for Wellness Consult a Doctor Sign up for Selfcare