Why the Blind Have a Superior Sense of Touch 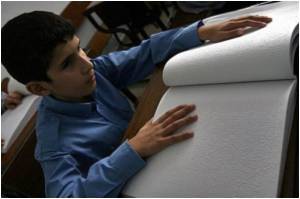 Scientists from the Max Planck Institute for Human Cognitive and Brain Sciences have discovered why blind people tend to have a superior sense of touch.

The team of Robert Trampel and colleagues found that blind people develop the Stripe of Gennari - a bundle of nerve fibers that develops even in those who are blind from birth and does not degenerate - which might contribute to an enhanced sense of touch and support fast reading of Braille.

A molecular mechanism implicated in geographic atrophy, the major cause of untreatable blindness in the industrialized world has been identified by researchers of the University of Kentucky.
Advertisement

The Stripe of Gennari - also known as the 'Stria of Gennari' - transverses the gray matter of the primary visual cortex as a distinct white line.


"Although the visual cortex is one of the best-studied parts of the brain, and the Stripe of Gennari is a rather obvious structure, why it develops and what its function is has not previously been studied in detail," said Trampel.

Playing bagpipes increases the risk of eye disorders which may lead to blindness.
Advertisement
However, the team has found that it can't be the only function of the stripe of Gennari.

"This brain structure therefore can't exclusively be involved in vision and must be capable of carrying out other tasks", says Trampel.

In the blind, the Stripe of Gennari could play a role in supporting the sense of touch, the scientists speculate.

"This faculty is essential in reading Braille and the region carrying the Gennari-Stripe is known to show an increased activity in the blind when performing this task."

In blind people, the brain uses tactile and acoustic stimuli to construct a rough spatial representation of the surroundings in the absence of visual information. The stripe of Gennari might play a role in this process and could later support highly demanding tactile tasks, like Braille-reading.

The team now aims to learn more about the work of this versatile nerve bundle in the human brain.

The study appears in Cerebral Cortex.

Vent Forte (Theophylline) Post-Nasal Drip A-Z Drug Brands in India The Essence of Yoga Diaphragmatic Hernia Sanatogen Hearing Loss Calculator Daily Calorie Requirements Noscaphene (Noscapine) Calculate Ideal Weight for Infants
This site uses cookies to deliver our services.By using our site, you acknowledge that you have read and understand our Cookie Policy, Privacy Policy, and our Terms of Use  Ok, Got it. Close
×