Why Children With Progeria Die Early? 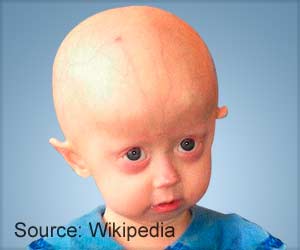 Hutchinson-Gilford syndrome, also known as progeria accelerates atherosclerosis and leads to premature death and the main cause behind it has been identified.

HGPS is a very rare genetic disease that affects fewer than 400 people in the world and for which there is no effective treatment.

HGPS is characterized by early aging accompanied by the development of atherosclerosis. Patients die at an average age of 14 years from a heart attack or stroke, processes triggered by the rupture of unstable atherosclerotic lesions.


Now, scientists at the Centro Nacional de Investigaciones Cardiovasculares Carlos III (CNIC) and the CIBER de Enfermedades Cardiovasculares (CIBERCV), led by Dr. Vicente Andrés, have generated the first genetically modified mice with accelerated atherosclerosis induced by the protein progerin, which causes the development of HGPS.
Advertisement
The research team found that the main cause of accelerated atherosclerosis and premature death in these mice was alterations in the smooth muscle cells lining the blood vessels.

The results of the study, published in Circulation, identify vascular smooth muscle cells as a possible therapeutic target for combatting the premature atherosclerosis in progeria.

The study was conducted in collaboration with Dr. Carlos López-Otín of the University of Oviedo and Dr. Jacob Bentzon at the CNIC. Age is the main risk factor for cardiovascular diseases, which are the principal cause of death and disability in the world. This is in large part a consequence of the progressive population aging in modern societies.

In HGPS, cardiovascular deterioration and aging are accelerated by the accumulation of an anomalous protein called progerin, produced as a consequence of a point mutation in the LMNA gene.

Children with HGPS are heterozygous for this mutation and show symptoms of premature aging, including loss of hair and subcutaneous fat, osteoporosis, joint stiffness, and wrinkled and mottled skin.

There is currently no effective treatment for HGPS and knowledge is very limited about the mechanisms underlying the accelerated atherosclerosis in this disease. This situation is in large part due to the lack of specific animal models.

Now, using mice with the disease-causing LMNA mutation and expressing progerin in all tissues, the researchers from the CNIC, CIBERCV, and the University of Oviedo have generated the first animal model of progeria that features premature atherosclerosis, the main cause of death in children with HGPS.

The team also analyzed mice that express progerin only in specific tissues implicated in the development of atherosclerosis in order to identify the cells responsible for cardiovascular disease in HGPS. Plaque rupture

Atherosclerosis is characterized by a progressive thickening of the artery wall and a narrowing of the blood vessel due to the growth of the atherosclerotic plaque.

Rupture or erosion of the plaque can trigger a heart attack or stroke. These serious complications normally occur after atherosclerosis has been progressing for several decades, but are tragically brought forward in patients with HGPS.

According to first author Dr. Magda Hamczyk, "we found that smooth muscle cells in the arterial wall die early in the development of disease in the progeroid mice, and this induces an anomalous accumulation of lipoproteins in the vessels. This significantly increases the formation of atherosclerotic plaques, and the loss of smooth muscle also destabilizes the plaques and promotes plaque rupture in more advanced stages."

Co-author Dr. Ricardo Villa-Bellosta added that "plaque rupture can cause a myocardial infarction and lead to the death of the animal."

These results also identify the vascular smooth muscle cells as a potential target for treatments to combat premature atherosclerosis in HGPS.

According to Dr. Vicente Andrés, "this new animal model is allowing us to advance knowledge of the molecular and cellular mechanisms that cause cardiovascular disease and accelerated aging in progeria, an indispensable goal for the development of new therapies for patients with this severe disease."

Moreover, progerin is detected in cells and tissues of individuals not affected by HGPS, as part of normal physiological aging, which shares many features with premature aging in progeria.

Progeria
'Paa' is a film in which Amitabh Bachchan, in a rare role reversal, plays son to Abhishek Bachchan, ...

Basics of Rare Diseases
Rare or orphan diseases are least understood of all chronic diseases. They are more common than ......