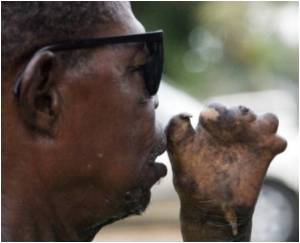 WHO Goodwill Ambassador for Elimination of Leprosy Yohei Sasakawa has called for extension of support to the patients to overcome the stigma associated with the disease, highlighting the discrimination against the leprosy-affected in India.

"Many parts of India still face the problems of discrimination and a major social stigma is attached to those afflicted with leprosy. After meeting and understanding them, one thing I can conclude is that the leprosy situation in India needs help," Sasakawa said.

Despite the fact that most of them are cured, they and their families are forced to settle in separate leper colonies in India.


"Necessary support should be extended to the leprosy-affected people and their families to change the scenario," he added.
Advertisement
The Japanese delegate was on a tour of the leper colonies Tuesday at Asansol in Burdwan district of West Bengal.

He was accompanied by Member of Parliament Dinesh Trivedi, who is currently the convenor of the Forum of Parliamentarian to Free India of Leprosy.

Residents of the Rahmatganj and Kankardanga leper colonies at Burnpur in Asansol sub-division -- home to 159 families -- mainly resort to begging, and collecting rags and scrap to make ends meet. Many also work as masons.

Many districts in India continue to report cases of leprosy higher than the WHO benchmark for elimination of leprosy. A total of 1.35 lakh new cases were detected during the year 2012-13 in the country, according to National Leprosy Eradication Programme data.

"We aim to provide them a life with dignity, better education for their children, pension for the elderly and ensure them acceptance into the society," said Sasakawa, who in 2006 established the Sasakawa-India Leprosy Foundation in India.

Scientists Decode Genome of the Medieval Leprosy Pathogen
An international team of scientists was successful in reconstructing a dozen medieval and modern ......

Researchers Study Medieval Strain of Leprosy to Discover Reason for Drop in Incidence After Middle Ages
A new study reports on the attempts by biologists and archeologists to study a medieval strain of .....

WHO Warns Not To Get Complacent About Leprosy
Though the fight against leprosy has made great progress in the last two decades, complacency may .....

Scientists Reveal 1 in 100 People Have Natural Genetic Resistance to HIV, Malaria, Leprosy, Hepatitis
One per cent of the population have a natural genetic resistance to deadly disease such as HIV, ......