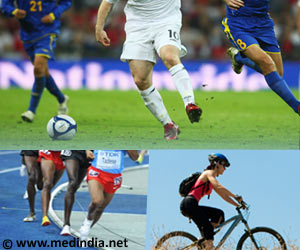 A new study conducted by researchers at University of Sunderland suggests that sportsmen who wear red are more likely to win as they have higher testosterone levels and are more aggressive and dominant compared to their opponents.

The researchers added that sportsmen who choose red colored clothes unconsciously signal something about their competitive nature and also affect their opponents psychologically. The researchers conducted their study on a group of 73 sportsmen who were given a competitive task and were told that their performance would be noted down on a leaderboard.

They were also given choices of clothes bearing two colors, red or blue, and were asked the reason for choosing a particular color. The researchers also tested the testosterone levels of the participants at the start and end of the task and they found that sportsmen who chose red color had higher baseline testosterone levels and displayed higher level of characteristics like dominance and aggression.


"This is the first study to look at whether biological factors, specifically testosterone which has been linked to characteristics such as dominance, aggression and competitiveness, may affect the choices we make in competitive scenarios. Also by allowing participants in a test to choose their colour, this study reveals that there may be something intrinsically different about "red" competitors, that can give them an advantage", lead researcher Daniel Farrelly said.


Source: Medindia
Advertisement
<< Lower Risk of Obesity With Far-Away Fast Food Restuarants
CDC Report Says Over 50% of Public Pools in the US are Cont... >>