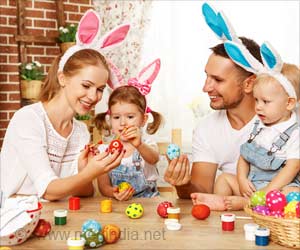 Team of researchers has determined an all exclusive decoding system in humans, which shows how we react to vibrations of various frequencies through touch.

Their findings, published in eLife, suggest that this decoding system overrules our tactile sensory channels when we perceive vibrotactile stimuli. The method depends on neural discharge (or spike) patterns, regardless of the type of receptor that receives the stimuli, challenging well-established ideas of how we process these sensations. The different skin regions on our bodies, such as on our heads, lips, and fingertips, differ in their types of touch receptors. In the fingertip alone, there are four different ways of sensing touch: one receptor is more sensitive to pressure, another to stretch, and two others respond to slow or fast vibrations. The touch receptor known as the Pacinian corpuscle is incredibly sensitive, and it is well-known that such sensors allow us to feel fast skin vibrations.

Advertisement
‘ This research has revealed stunning mysteries of our brain and its reaction to various sources and frequencies of touch.’
Read More..

Now, the research team from Neuroscience Research Australia (NeuRA) in Sydney, has found a way to trick these receptors into responding to the slow vibrations that are mainly signaled by a different receptor type. "The currently established view is that feeling a vibration through touch evokes two different sensations, subserved by two distinct receptor types, Meissner's and Pacinian corpuscle, which may engage different neural processing channels and play different biological roles," says first author Ingvars Birznieks, Associate Professor at the University of New South Wales (UNSW) Sydney and Senior Research Fellow at NeuRA. "These two systems have been labeled as Pacinian and non-Pacinian channels. Our study now challenges the idea of how these channels work within the tactile sensory system."


Birznieks and his team recruited healthy volunteers aged 20 to 26-years-old and without any known history of neurological disorders which would affect their somatosensory system. Using brief low-frequency vibratory stimuli to activate the Pacinian channels in the participants selectively, the scientists confirmed that only Pacinian receptors were responding to the tiny tapping movements on the skin. The team could then test what the human brain understands from signals coming through a different sensory channel than the normal route.
Advertisement
"To our surprise, we found that the brain didn't seem to care which channel and receptor this information came from - it was all processed in the same way," explains senior author Richard Vickery, also Associate Professor at UNSW Sydney. "As the receptor type appeared not to matter, it meant that the different skin regions with their different receptors could all cause the same brain sensations. This suggests a universal frequency decoding system, possibly explaining why we feel vibrations in the same way across the whole body."

Vickery adds that the findings indicate the need to review the foundations on which processing of vibrotactile stimuli is attributed to Pacinian and non-Pacinian channels.

"In the longer term, continuously improving our understanding of how such neural signal processing works in the brain could help in the development of more effective bionic limbs that enable real-time touch sensation," he concludes.

Superior Canal Dehiscence
Superior canal dehiscence (SCD) results from a break in the bone above the semicircular canal, ......

What Happens to the Brain When We Touch Cold Objects?
Neuroscientists map brain's response to cold touch and find that the posterior insula is ......