Researchers say that in Asian children must be given Vitamin D supplements from birth to age of two years in order to avert the reappearance of deficiency symptoms. Researchers examined the present of vitamin D deficiency between 1994 and 2005 and have published their findings in the latest issue of Archives of Disease in Childhood.

Vitamin D deficiency can cause rickets, poor tooth formation, convulsions, general ill health, and stunted growth. And it has been linked to an increased risk of multiple sclerosis, certain cancers, and cardiovascular disease, diabetes, osteoporosis, and mental health problems in later life.


The analysis covers patients at one health trust in north west England , which used to provide vitamin D supplements.

During the period under study, they identified 14 cases of vitamin D deficiency, 12 of which were diagnosed between 2000 and 2005. Virtually all those affected were of Asian ethnicity, and none had received vitamin D supplements.

The figures showed that rates of vitamin D deficiency were around eight times as high among Asian children, with one in 117 affected, compared with one in 923 children, overall.

But in recent years, health authorities have deemed the cost of primary prevention a needless expense, given that the overall levels of vitamin D deficiency in the population are low, say the authors.

Vitamin D supplementation has declined nationwide, with only 4% of babies given the supplement in 2000, compared with 12% so treated in 1995.

This is despite recommendations from the government Committee on Medical Aspects of Food and Nutritional Policy (COMA), which suggest that infants and young children should be given vitamin D supplements for at least the first two years of their lives, and more recent advice from the Chief Medical Officer.

But it costs more to treat the consequences of the deficiency than it does to prevent its occurrence, say the authors.

"We therefore suggest that supplementation with vitamin D of all babies of Asian origin for the first 2 years of life might be the economic answer to a growing problem," the authors conclude.

While people of Asian ethnicity are predominantly affected, there are cases of the deficiency among white populations, particularly among recent arrivals to the UK from Eastern Europe, they add. 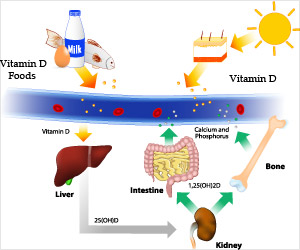