Value of Friendship More Important in Some Cultures 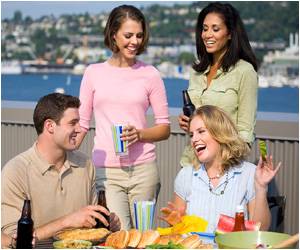 Close Friendships can be Nurtured in Workplace

A new study says that our closest friends are now our workmates because we are too busy to go out and meet new people.
Advertisement
‘Cultures that place more value on friendships enjoy its various physical and psychological health benefits. ’
Read More..


Researchers have examined the cultural and health benefits of close human relationships in a new study and claim that friends are much more than just trusted confidants.

The study consisted of 323,200 participants from 99 countries, making it one of the largest of its kind. Previous studies only compared a few specific cultures with each other.

William Chopik, the study's senior author, states that friendships are one of the untapped resources people can draw on to pursue a happier and healthier life. They have various health and well-being benefits despite costing nothing.

"We found that placing a value on friendship was good for people's health and well-being regardless of where they lived. However, looking at friendships as an important part of life is more important in some cultures than it is in others," he continued.

Results showed that worldwide, those who are invested in friendships enjoy better physical and psychological health, especially older adults or those with less education. Individualistic, unequal, or constraining cultures significantly benefit from friendships.

"People who come from more privileged settings have a lot of resources that contribute to their health and happiness, but it looks like -- for those who don't have those resources -- friendships might serve as a particularly important factor in their lives," Chopik said.

Chopik founded and runs Michigan State University's Close Relationships Lab. One of their major goals is to examine and study friendships so that people can improve their lives for the better.

"In today's world, there's a general feeling that we're in a 'friendship crisis' in which people are lonely and want friends but struggle to make them," Chopik said. "We show here that they're beneficial for nearly everyone, everywhere. But why are they so hard to form and keep? That's what we're working on next."

Combining the foods to give you the optimum nutritional value is the key to healthy eating.
Advertisement
<< Exposure to Sunlight Worsens Autoimmune Diseases
Exercise Doesn't Undo Negative Effects of Excess Body Fat >>

World Lupus Day 2022: Standing Along With the Lupus Patients
View all
News Archive
News Resource
Advertisement
News Category
Can You Attract Positivity Through Stress? Substance Abuse and It's Barrier: Existing Inequalities What Needs to be Improved to Prevent Suicidal Ideation? Mental Health and Homelessness  is There a Link? Improve Your Mental Health Through Social Media Breaks
More News
Sign up for Wellness Consult a Doctor Sign up for Selfcare