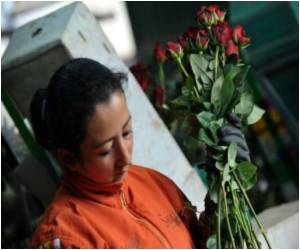 Valentine's Day can turn the most hard-bitten cynic into a sentimental softie, but for Colombia's flower growers the holiday is less about romance than cashing in on a huge day for sales.

Colombia sells some 15 percent of its annual rose production in the runup to the global commemoration of romantic love. It is expected to provide a much-needed billion-dollar boost, after a global recession and local frost hobbled last year's crop.

Valentines Day was celebrated in New York by either tying the knot in the Empire State Building or "Getting some" of the newly-unveiled official condoms.
Advertisement

White plastic tarps cover the elevated plains outside Bogota and Colombia's second city Medellin for as far as the eye can see. Inside the greenhouses, thousands of mostly female workers scramble to harvest, cut and box millions of roses bound for foreign markets, mainly in the United States.


Valentine's is a frantic export period; Colombia is expecting to send 450 million flowers to the United States, which gets 65 percent of its roses from Colombia.

Celebrating Valentines in Saudi is an Offense

True to tradition, Saudi Arabia's religious police are zealously enforcing a ban on Valentine's Day symbols in the austere Muslim kingdom.
Advertisement
And it's a race against time, as growers hold out as long as possible before picking the bulbs of red or yellow petals, which last no more than 15 days from when they are picked.

Then in a flurry, the flowers are packaged and bundled on to flowers-only cargo flights -- about 30 planes per day at the peak of the export.

It's a dramatic turnaround from last year, when Valentine's Day production and exports plunged.

"The US economic situation was not the best," in early 2010 as a result of the worst American recession in generations, said Augusto Solano, president of Asocolflores, the Colombian Association of Flower Exporters.

"In addition, many farms in the savannah of Bogota were hit with frost, and some lost up to 80 percent of the production they had expected during that period," he added.

But this year sales are returning with a flourish, thanks in part to the US Congress, which renewed its duty-free trade program with Andean nations last December, conveniently until Valentine's Day eve.

The scheme allows growers to export their flowers duty-free, providing a boost to Colombia which is already the world's second largest flower exporter, behind only the Netherlands.

Colombian flower exports hit $1.1 billion last year, but that is expected to rise in 2011.

The United States is the main destination, taking 80 percent of Colombia's roses, although in recent years the South American nation has shown it is intent on cracking Europe and Russia.

"A culture of daily flower consumption exists there, unlike in the United States, which is limited to celebrations. The Swiss spent on average 82 euros ($110) on flowers in 2009, while Americans spent only 21 euros ($28)," he said.

While Colombia has boosted its sales to Britain (now four percent of Colombia's flower exports) and Spain (two percent), Franklin acknowledged there was stiff competition from the Netherlands.

Moreover, the floral business can be subject to the whimsy of a discerning and style-obsessed public, unlike most other agricultural crops, noted Franklin.

"They are luxury goods, a business in which the renewal of varieties is essential," he added. "The flower is a product that conveys emotion. Our competition is not the products of Ecuador or Kenya, it's a bottle of wine or a box of chocolates."

Such a perception is shared by Julian Herrera, manager of Flora Export, which has some 20 hectares (50 acres) of farmland under cultivation on the outskirts of Bogota that produce about a million roses per month.

"During this season we mainly export red roses," Herrera said.

"The favorite at this time is called 'Freedom,' which has a large bulb and good durability in the vase."

Such staying power is crucial to exporters, who must choose flowers with stems straight enough and thick enough to withstand a journey that can last up to five days from rose bush to a lover's bouquet.

Shortly after being picked, the flowers are boxed and laid into refrigerated trucks which shuttle them to the airport.

Authorities run them through scanners -- designed to detect cocaine -- before the flowers are placed in cargo containers wrapped in padding to prevent thermal shock while in the cargo hold for their night flights out of Colombia.

Indian Hindu extremists who recently dragged young women out of a fashionable bar as part of a morality campaign have vowed to assault couples marking Valentine's Day, according to reports Tuesday.
Advertisement
<< Smoking in Films and TV Will Be Seen No More in China
Latest Craze Among Brit Women: 'Chicken Fattening' Pills Fo... >>

More News on:
Food Gifts for Your Valentine

Turmeric Powder - Health Benefits, Uses & Side Effects Color Blindness Calculator Drug Side Effects Calculator Hearing Loss Calculator Sinopril (2mg) (Lacidipine) The Essence of Yoga Pregnancy Confirmation Calculator Find a Doctor Nutam (400mg) (Piracetam) Sanatogen
This site uses cookies to deliver our services. By using our site, you acknowledge that you have read and understand our Cookie Policy, Privacy Policy, and our Terms of Use