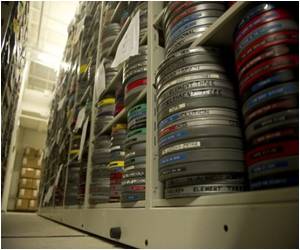 For those looking for American cultural information online, a new "digital public library" set to launch this month aims to provide an alternative to Google.

Visitors will be able to view, for example, letters penned by George Washington, a copy of the Declaration of Independence in the handwriting of Thomas Jefferson, and ambrotype and daguerreotype images of Abraham Lincoln.

The Digital Public Library of America site dp.la will launch April 18 with more than two million objects -- including digital renderings of photos, books, manuscripts and other items from places such as the Smithsonian Institution, along with museums, libraries and historical institutions around the country.


"We are bringing together the richest of America's archives and museums, and making them easily searchable for teachers, scholars, journalists and others," said Dan Cohen, the DPLA executive director.
Advertisement
Thomas Jefferson's 1790 letter accepting his appointment as secretary of state to Washington is among the documents. One can find Matthew Brady's early Lincoln photographs and historical maps of the Americas from the David Rumsey Map Collection.

The site created through the impetus of Harvard University's Berkman Center for Internet and Society is modeled after the Europeana library in Europe and the Australian National Library's Trove project.

Cohen said DPLA can be used as a search portal for researchers, as an alternative to a search engine like Google because it is a self-contained site with many objects that might not be available by Web search.

"I think we are going to have a lot better descriptions that won't come through in a Google search," Cohen told AFP. "It will be a far superior experience."

For students as researchers, DPLA can be an alternative to Wikipedia, because the new library will be a primary resource.

"Wikipedia is a secondary source, but we are going to have the stuff," Cohen said. "But I think Wikipedia will be a great partner."

For now, the library is not duplicating the efforts of Google Books -- a project digitizing millions of works which has provoked controversy -- but will "explore models for digital lending of in-copyright materials," according to the DPLA website.

Cohen said DPLA will be "a lot more comprehensive" than Google books, with "the full array of materials including music, photography, all kinds of art and manuscripts."

He said the material will be online "in an open fashion, and not a gated fashion."

Cohen said the site will be mobile-friendly and enable people to use their locations to find information such as "what New York City looked like in the 1840s" or "finding things in your area."

An advantage to the library is that it will include materials which may not be on the Web but "sitting on hard drives" in local museums or historical societies, Cohen said.

"We are knitting together those collections," he added.

Cohen said that in addition to being a portal, the new library will be "a platform that other people will be able to build upon," particularly software developers and researchers.

A joint project with Europeana will tell the story of European emigration to the United States during the 19th and 20th centuries with photographs, manuscripts and other documents.

Carl Pforzheimer, the Harvard University Library and a member of the DPLA steering committee said the exhibit "inaugurates an alliance that will multiply the benefits of the Internet for generation after generation, everywhere in the world."

Materials for the exhibit come from the Bibliotheque Nationale de France, the National Gallery of Ireland, the Jewish Museum of London, the Royal Library of the Netherlands, the Saxon State Library and the Norwegian Photo Archives.

The project has received funding from the National Endowment for the Humanities and private philanthropies including the Alfred P. Sloan Foundation and Knight Foundation.

The Digital Public Library is raising funds and is "open to other kinds of partnerships," Cohen said.

Cohen is leaving his position of history professor at George Mason University, saying he will be concentrating on "the greatest digital history project of all time."

British Library Will Soon Turn Digital
To preserve billions of web pages, blogs and e-books which appear on the UK web domain, the British ...

Library: Not a Place to Visit for Pakistanis
85 percent of Pakistanis have never been to a library, reports Gilani Research Foundation Survey ......