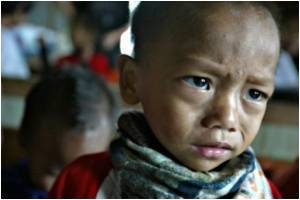 Australian scientists are proposing a simple urine test to detect risk of early onset of obsessive-compulsive disorder (OCD). This has become possible in the wake of the discovery by the researchers from the Centenary Institute in Sydney that the gene behind a rare kidney disorder could also cause OCD.

It's known that the gene SLC1A1 controls a protein that recovers essential chemicals called amino acids from the kidneys, but it also controls these same amino acids when they act as transmitters in the brain.

The Central nervous system consists of the brain, the spinal cord, and the body's nerve network. This complex system is based on one kind of cell the neurons.
Advertisement

Now the Sydney researchers have identified mutations that stop the gene working properly in the kidneys, and suspect these same mutations are also involved in OCD.


OCD sufferers feel intense anxiety that bad things will happen, and are compelled to practise rituals - such as handwashing or arranging objects - to prevent them.

A new study has suggested that using electrodes to stimulate areas deep within the brain are likely to be an alternative therapy for patients with obsessive compulsive disorder
Advertisement
Professor John Rasko says doctors currently screen babies for dicarboxylic aminoaciduria (DA), an inherited disorder of the kidneys.

"This disorder affects the transport of two critical amino acids in nutrients - glutamate and aspartate," he said.

"These two amino acids are crucial in many aspects of building the body's proteins, but also one of them, glutamate, acts as a transmitter in the brain.

Professor Rasko says people with OCD have too much glutamate because of a defect in the pump.

He says this could simplify the means of identifying people who have a genetic predisposition to OCD.

"This may provide us with a new opportunity to test people who have OCD with a relatively simple test of the urine," he said.

"Although not everybody with OCD will have an abnormality in the urine test, what we'd like to be able to show in the future is that it will be able to provide insight into the mechanism by which this causes this otherwise debilitating disorder."

Professor Rasko says OCD affects up to 3 per cent of all Australians and in its worst cases can be completely debilitating, causing people to have to stay at home.

They hope to develop their findings into a test that can allow earlier diagnosis of children with OCD.

"During the past few decades studies have revealed that OCD has a strong genetic component," Centenary Institute Professor John Rasko said in a statement.

And various genetic studies had linked the disease to the SLC1A1 gene, he said, but there was no physical proof of how the gene caused it.

"Our research is a major first step towards bridging this gap," Prof Rasko said.

"It is the most intractable and disabling of the anxiety disorders," she said in the Centenary Institute statement.

"The earlier we can diagnose OCD the sooner we can start treatment to manage the obsessive and compulsive behaviours."

The Centenary Institute is an international consortium of researchers from the University of Sydney, the Australian National University, Université de Sherbrooke in Canada and Royal Prince Alfred Hospital.

More News on:
Urinary Stones In Children Vesico-Ureteric Reflux Causing UTI in Children Diet for Kidney stones Varicocele What Does the Color and Odor of Your Urine Says About Your Health

Daily Calorie Requirements The Essence of Yoga Diaphragmatic Hernia Pregnancy Confirmation Calculator Hearing Loss Calculator Indian Medical Journals A-Z Drug Brands in India Accident and Trauma Care Iron Intake Calculator Noscaphene (Noscapine)
This site uses cookies to deliver our services. By using our site, you acknowledge that you have read and understand our Cookie Policy, Privacy Policy, and our Terms of Use