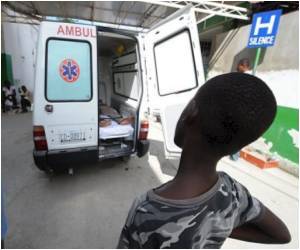 The UN Security Council has voted to reduce the UN peackeeping mission in Haiti which is currently battling a huge controversy over a cholera epidemic.

One day after a lawsuit against the United Nations was filed in a New York court on behalf of victims, the Security Council urged the UN to support government efforts to battle the epidemic.

Evidence of genetic changes that might help protect some people from contracting cholera has been uncovered by Harvard scientists.
Advertisement

The epidemic has killed more than 8,300 people since it started in October 2010 and made more than 679,000 sick. It has been traced to a river next to a UN camp where Nepalese troops were based.


A Security Council resolution which extended the mandate of the UN mission in Haiti, MINUSTAH, noted government efforts to "control and eliminate" the epidemic.

Previous research has shown that different species of bacteria battle for dominion over their competitors.
Advertisement
It urged "United Nations entities in coordination with other relevant actors to continue to support the government of Haiti in addressing the structural weaknesses, in particular in the water and sanitation systems" in the impoverished Caribbean nation.

The resolution also acknowledged "United Nations efforts to combat cholera" including through a $2.2 billion appeal launched by UN leader Ban Ki-moon to counter the epidemic.

It said there should be support for "rapid and targeted medical responses to outbreaks designed to reduce the threat" from the cholera.

The Security Council reduced the maximum size of MINUSTAH to 5,021 troops, down from 6,233, and 2,601 police from 2,457. The reduction is part of a general campaign to cut UN forces where the security threat has fallen away.

But the UN faces a prolonged battle over MINUSTAH which was originally sent to end political strife in 2004 and also played a key role after the January 2010 earthquake which killed more than 250,000 people.

Lawyers from the US-based Institute for Justice and Democracy in Haiti (IJDH) filed a lawsuit in New York on Wednesday seeking compensatiion from the United Nations.

Medical studies have increasingly pointed to a UN link to the cholera. The strain in Haiti is one that is commonplace in Nepal.

But the United Nations said in February that the legal complaint was "non-receivable" under a 1946 convention setting out the UN's immunities for its actions.

The UN has since refused to comment on the court case, which in a worst case scenario could cost billions.

"The UN remains committed to do all it can to help the people of Haiti overcome the cholera epidemic," a UN spokesman, Farhan Haq, said Wednesday when asked about the damages claim.

Health experts have underlined the need for better research as well as improved coordination between various agencies in order to tackle neglected tropical diseases such as cholera.
Advertisement
<< Contaminated Water Still Served in Flights
Heart Conditions More Common in Whites >>