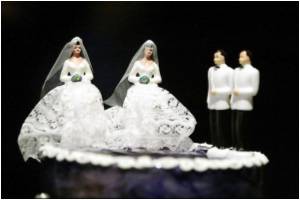 Fish Huang and her partner You Ya-ting, both wearing traditional white bridal gowns, said "I do" in front of a Buddha statue and exchanged prayer beads rather than rings in a monastery in Taoyuan, in northern Taiwan.

Slim, articulate and intelligent are the words that can be used to describe Koyuki Higashi.

Nearly 300 Buddhists chanted sutras to seek blessings for the couple, both aged 30.


Shih Chao-hui, a female Buddhist master who presided over the ritual, hailed it as a historic moment.

"We are witnessing history. The two women are willing to stand out and fight for their fate... to overcome social discrimination," said Shih, a well-known advocate for social justice.

Scotland will soon allow same-sex couples to marry by bringing forward legislation, making it the first part of the UK to do so, the government announced on Wednesday.

"Some people might find it astounding (a woman performing the ceremony) but Buddhism does not engage in ideological struggles and I am used to strange looks from my own experience in the social movement," she said.

The couple's parents were notably absent from the ceremony, in an indication of the pressure facing some homosexuals and their families.

"Our parents initially agreed to attend and they regret that they couldn't be here. We understand that people have different acceptance of media exposure and we want to give them more space," Huang said shortly before the wedding.

"We hope with the master's support, the wedding will change many people's perspective even though it is not legally binding," said the social worker. "We hope the government can legalise same-sex marriage soon."

Taiwan is one of the most culturally liberal societies in East Asia, and gay and lesbian groups have been urging the government for years to make same-sex unions legal.

However, President Ma Ying-jeou has said public consensus was needed before the government can move ahead with the law.

Gay rights groups drafted a new bill earlier this year and urged Ma to push for its legislation before his term ends in 2016.

A Chick-fil-A food truck in downtown Washington was targeted by protesters after the fast-food chain's president came out candidly against same-sex marriage on religious grounds.
<< Grapes Protect Heart Health of Men
Wait! Instant Decision May Not be the Best Decision >>

First Gay Pride Parade In Vietnam To Be Hosted Soon

Is Life Better Staying Single or Getting Married?
News Archive
News Resource
News Category
Improve Road Safety Measures and Save Half a Million Lives Every Year Worldwide Love Hormone Improves Bonding and Cooperation in Social Networks Five Love Languages Every Couple Should Know Go for a Walk to Speed Up Your Brain Function 5 Types of Tea Women Should Drink Daily
More News
Sign up for Wellness Consult a Doctor Sign up for Selfcare

More News on:
How to Save your marriage Is Life Better Staying Single or Getting Married?