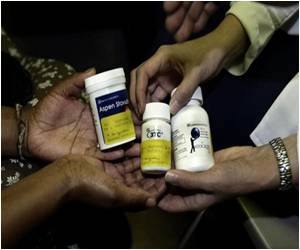 Nearly 70 million people have benefitted from Rajasthan's free medicine scheme, which was launched by Chief Minister Ashok Gehlot a year ago on Mahatma Gandhi's birth anniversary.

"Two lakh (200,000) people take advantage of this scheme every day. Some patients have benefitted more than once. They are being given free essential medicines at 15,355 medicine distribution centers and in all the government hospitals," a senior official said.

Rajasthan has a population of 68.6 million people, and is the first to run the free medicine scheme on such a large scale, the official claimed.


"In the second year of the scheme, the state government has allocated Rs.300 crore. The chief minister has also directed that the number of distribution centers and the medicines being given under the scheme also be increased."

Drug toxicity is an adverse reaction of the body towards a drug that results as a side effect of a drug, reaction to a drug or drug abuse.
Advertisement
Nearly 400 types of generic drugs and surgical items are available for free distribution under the existing scheme. These drugs are provided free of charge to patients at primary healthcare centers, community healthcare centers, district hospitals and medical colleges, officials said.

Apart from the free medicine, the government is also planning to make free diagnostic tests at the hospitals run by it.

Chief Minister Gehlot has already assured that there would not be any problem in financing any health-related scheme. "If the people are given free medicines and good care, their trust in government hospitals will increase," the chief minister said recently.

Addressing a workshop recently, he also said that the results of the scheme were very encouraging and the central government was planning to implement the scheme across the country based on the success of the Rajasthan model.

The number of patients visiting government-run hospitals has gone by up by almost 50 percent in the last one year, largely due to the free medicine scheme. The chief minister also recently launched a helpline to prove information about the scheme.

"Every member of the society is eligible. The poor are given priority. Persons below the poverty line and weaker sections can shed their worries over healthcare expenses," a health department official said.

Several drugs are either banned or withdrawn after introduction in the market.
Advertisement
<< Risk Of Diabetes Very High In London
Army Should Be At The Forefront, Not Rangers >>