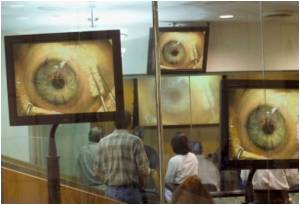 Australian researchers say they have discovered two new genes linked to open angle glaucoma, a severe type of the eye disease. Scientists at the Queensland Institute of Medical Research (QIMR) were associated with the project.

The study has been published online in the prestigious international science journal, Nature Genetics.

Researchers have discovered a gene involved in an acute and severe form of glaucoma (angle closure glaucoma).
Advertisement


"It opens the pathway to developing completely new ways of treating glaucoma patients that could delay disease progression and prevent blindness," he said.
Advertisement
"Open angle glaucoma, sometimes called chronic glaucoma, is the most common type of glaucoma, and tends to progress at a slow rate.

"Sufferers may not notice that they have lost vision until the disease has progressed significantly.

"We found that 18% of the population carry risk variants at these two genes, making them up to three times more likely to develop severe glaucoma than those that don't.

"  Glaucoma is the leading cause of irreversible blindness worldwide, affecting an estimated 300,000 people in Australia, half of which are currently undiagnosed."

It is the collective name for eye diseases causing irreversible loss of peripheral vision, often associated with too much pressure developing inside the eyeball.

"Although open angle glaucoma is the most common form of the disease, it is poorly understood and difficult to diagnose in its early stages," said Dr MacGregor.

"Many cases still remain undiagnosed until irreversible loss of vision has occurred."

Researchers from QIMR collaborated with groups from five other Australian universities on the ground-breaking study of 4,500 patients from Australia and New Zealand.   Dr MacGregor emphasized the important role of twins in the research.

"The genetic information provided by the twins was used in the study as a comparison to those affected by glaucoma," he said.