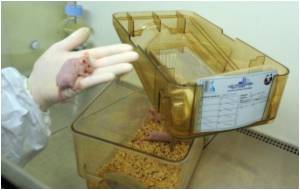 Scientists have discovered vast numbers of genes that are mutated, deleted or copied in cancer cells on sequencing cancer-cell genomes. Though it is nearly impossible to test them all in a timely fashion, this treasure trove is a boon for researchers seeking new drug targets.

To help speed up the process, MIT researchers have developed RNA-delivering nanoparticles that allow for rapid screening of new drug targets in mice. In their first mouse study, done with researchers at Dana-Farber Cancer Institute and the Broad Institute, they showed that nanoparticles that target a protein known as ID4 can shrink ovarian tumors.

The nanoparticle system, described in the Aug. 15 online edition of Science Translational Medicine, could relieve a significant bottleneck in cancer-drug development, says Sangeeta Bhatia, the John and Dorothy Wilson Professor of Health Sciences and Technology and Electrical Engineering and Computer Science and a member of the David H. Koch Institute for Integrative Cancer Research at MIT.


"What we did was try to set forth a pipeline where you start with all of the targets that are pouring out of genomics, and you sequentially filter them through a mouse model to figure out which ones are important. By doing that, you can prioritize the ones you want to target clinically using RNA interference, or develop drugs against," says Bhatia, one of the paper's senior authors.
Advertisement
William Hahn, an associate professor of medicine at Harvard Medical School and the paper's other senior author, is the leader of Project Achilles, a collaborative effort to identify promising new targets for cancer drugs from the flood of data coming from the National Cancer Institute's cancer-genome-sequencing project.

Among those potential targets are many considered to be "undruggable," meaning that the proteins don't have any pockets where a traditional drug could bind to them. The new nanoparticles, which deliver short strands of RNA that can shut off a particular gene, may help scientists go after those undruggable proteins.

"If we could figure out how to make this work [in humans], it would open up a whole new class of targets that hadn't been available," says Hahn, who is also director of the Center for Cancer Genome Discovery at Dana-Farber and a senior associate member of the Broad Institute.

Lead authors of the paper are Yin Ren, an MD/PhD student in Bhatia's lab, and Hiu Wing Cheung, a postdoc in Hahn's lab.

An abundance of targets

Through Project Achilles, Hahn and his colleagues have been testing the functions of many of the genes disrupted in ovarian cancer cells. By revealing genes critical to cancer-cell survival, this approach has narrowed the list of potential targets to several dozen.

Typically, the next step in identifying a good drug target would be to genetically engineer a strain of mice that are missing (or overexpressing) the gene in question, to see how they respond when tumors develop. However, this normally takes two to four years. A much faster way to study these genes would be simply to turn them off after a tumor appears.

RNA interference (RNAi) offers a promising way to do that. During this naturally occurring phenomenon, short strands of RNA bind to the messenger RNA (mRNA) that delivers protein-building instructions from the cell's nucleus to the rest of the cell. Once bound, the mRNA molecules are destroyed and their corresponding proteins never get made.

Scientists have been pursuing RNAi as a cancer treatment since its discovery in the late 1990s, but have had trouble finding a way to safely and effectively target tumors with this therapy. Of particular difficulty was finding a way to get RNA to penetrate tumors.

Bhatia's lab, which has been working on RNAi delivery for several years, joined forces with Hahn's group to identify and test new drug targets. Their goal was to create a "mix and dose" technique that would allow researchers to mix up RNA-delivery particles that target a particular gene, inject them into mice and see what happens.

In their first effort, the researchers decided to focus on the ID4 protein because it is overexpressed in about a third of high-grade ovarian tumors (the most aggressive kind), but not in other cancer types. The gene, which codes for a transcription factor, appears to be involved in embryonic development: It gets shut down early in life, then somehow reactivates in ovarian tumors.

To target ID4, Bhatia and her students designed a new type of RNA-delivering nanoparticle. Their particles can both target and penetrate tumors, something that had never before been achieved with RNA interference.

On their surface, the particles are tagged with a short protein fragment that allows them to enter tumor cells. Those fragments are also drawn to a protein found on tumor cells, known as p32. This fragment and many similar ones were discovered by Erkki Ruoslahti, a professor at the Sanford-Burnham Medical Research Institute at the University of California at Santa Barbara, who is also an author of the new paper.

Within the nanoparticles, strands of RNA are mixed with a protein that further helps them along their journey: When the particles enter a cell, they are encapsulated in membranes known as endosomes. The protein-RNA mixture can cross the endosomal membrane, allowing the particles to get into the cell's main compartment and start breaking down mRNA.

In a study of mice with ovarian tumors, the researchers found that treatment with the RNAi nanoparticles eliminated most of the tumors.

The researchers are now using the particles to test other potential targets for ovarian cancer as well as other types of cancer, including pancreatic cancer. They are also looking into the possibility of developing the ID4-targeting particles as a treatment for ovarian cancer.