Tumor Debris Left Over from Cancer Therapies may Cause Cancer Recurrence 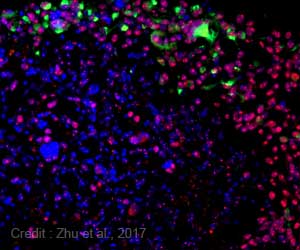 While cancer therapies are designed to kill tumor cells, in the process they produce tumor cell debris. In a study published in The Journal of Experimental Medicine, a research team from Brigham and Women's Hospital show that this leftover debris can stimulate inflammation and tumor growth. They also add that a molecules called resolvins can block the unwanted inflammatory response. The findings point towards a new way to enhance the effectiveness of current cancer therapies and potentially prevent tumor recurrence.

When conventional cancer treatments, such as radiation or chemotherapy drugs, break apart tumors, they can also spread and stimulate the production of proinflammatory cytokines. These signaling molecules, known to promote tumor growth, were at the center of the investigation.

Advertisement
‘When mice were co- injected with tumor debris and a small number of non-growing cancer cells, the debris stimulated tumor formation.’

"Dead and dying tumor cells are an underappreciated component of the tumor microenvironment that may promote tumor progression," said Professor Charles Serhan, PhD, DSc, Department of Anesthesiology, Perioperative and Pain Medicine at BWH.


The team administered a variety of therapeutic drugs to lab-cultured cancer cells and collected the resulting debris. When co-injected into mice with a small number of non-growing cancer cells, the debris stimulated tumor formation. A similar test treated mice with the chemotherapy drugs such as cisplatin and vincristine to generate debris in vivo, supporting the conclusion that the debris helped surviving cancer cells form tumors. The team concluded that a lipid called phosphatidylserine stimulated immune cells to produce a "cytokine storm" when exposed to the cancerous cells and caused the growth.
Advertisement
The researchers reasoned that if drug-generated debris was promoting tumor growth, clearing the debris might stop it. The team focused on the body's own resolvins which act as stop signals to end or "resolve" the inflammation. Resolvins counter the debris-stimulated proinflammatory cytokines and stimulate the immune system including white blood cells called macrophages ("the big eaters") to remove or "mop up" the debris. Resolvins are biosynthesized by the body from omega-3 essential fatty acids. Resolvins were discovered at the Brigham and Women's Hospital by Dr. Serhan and his laboratory and are a new approach to turn off inflammation in the human body to prevent a "cytokine storm" rather than blocking a single pro-inflammatory factor