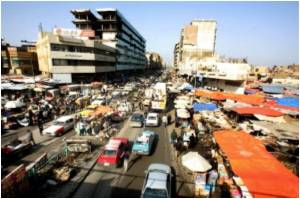 With many doubtful that the rules will achieve the aim of curbing car bombs, moves to bar half of Baghdad's cars from the roads have left residents frustrated.

Faced with a surge in attacks, including a summer of bloodletting in the Iraqi capital where waves of car bombs have struck on a near-weekly basis, officials introduced the measure on Saturday.

Vehicles with odd-ending registration plates are now allowed to move on Baghdad's roads one day, followed by vehicles with even-ending plates the next.


Implemented with barely any warning in a city with little semblence of a reliable public transport network, the measure is a revival of one taken in 2005 when violence was rising ahead of the worst of Iraq's sectarian warfare.
Advertisement
Those caught breaking the ban face fines of 30,000 dinars ($25) and the impounding of their car.

Exemptions have been granted for buses, taxis, trucks and vehicles belonging to senior government officials, doctors, journalists and select others.

"It is an additional burden," said Abdulqader Saad, a 37-year-old agricultural engineer who now runs a shop selling roses.

"But the streets are the same, the traffic is the same. It has not solved anything and I do not think it will help improve security."

Standing in front of his car at a garage near Shuhada Square a short walk from the Tigris River, he added: "I used to come to the market and takes things I needed by car. Now I'll need to take a taxi."

The six million-odd residents of Baghdad are heavily dependent on their personal cars, with little in the way of public transport aside from minibuses and taxis.

Officials have said the measures are only temporary, but the last time they were implemented, they stayed in place for six years.

As a result, taxi drivers, operators of river taxis and others offering public transport have seen business pick up as commuters have had to rely on their services more regularly.

"I used to take my car to cross the bridge, it was both easier and faster," said Dhia Nadhim, a shop worker.

"Now I have to park the car on this side and pay 1,000 dinars each way to cross by boat. And once on the other side, I will have to take a bus or a taxi to reach my place of work," he said.

The boatsman, 21-year-old Hisham Ahmed, who carries a few passengers at a time across the river in his engine-driven fishing boat, reckons business has more than doubled since the ban was introduced.

Despite standing to benefit by picking up more fares, one taxi driver voiced worry over the impact the move would have on Iraqis.

"I do not want to eat when others are going hungry," Adel Karim said. "This decision does not help the Iraqi people. The whole situation is bad."

Several commuters, however, voiced agreement with the tight new rules, arguing that the measures would help security forces and alleviate some of Baghdad's morning gridlock.

"It is a very good decision," said Hashim Mohammed Hanoon, a 46-year-old salesman at the wheel of his odd-ending-number-plated car.

"It makes for less crowded streets and you can get around more easily."

Hanoon acknowledged that "for those who have to get around for work it makes things more difficult," and noted: "Tomorrow I will also have to go to work and I will have to take a taxi."

"But still it makes me feel better about being out on the streets," he said.

Back near Shuhada Square, 43-year-old minibus driver Jabbar Khalaf argued that the measures could help as security forces could more thoroughly search suspicious cars at the capital's many checkpoints.

But one of his passengers strongly disagreed.

"Don't you think someone wanting to set off a car bomb can't do it just as easily on an even-numbered day as on an odd-numbered day?" asked Ali Jamil Ahmed, a retired civil servant.

"They (militants) can do anything," he said. "They can also just walk up to you and blow themselves up."

Despite Violence Iraq Seeks to Promote Tourism
As it trundles down busy roads, the minibus packed with tourists would be unremarkable. Except for ....

Iraqis Still Plagued by Deadly Violence
The Iraqi dentist never got over being kidnapped, chained to a bed and abused. Today he lives in ......