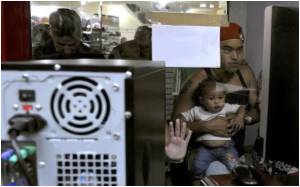 Standards of living and access to technology increases, as the developing world continues to develop.

Unfortunately, as personal computers, laptops and mobile phones become increasingly common so the problem of recycling and disposal of such devices when they become technologically obsolete rises too, according to research published in the International Journal of Environmental Technology and Management.

Neelu Jain of the PEC University of Technology, in Chandigarh and Pamela Chawla of the Surya World, Surya World Technical Campus in Punjab, India, have estimated the potential number of obsolete desktop and notebook computers and the quantity of various toxic components that will be generated from these devices over the next ten to fifteen years in India. They suggest that it will take three decades at the current rate of penetration before there is one computer per capita across the nation. However, there will be higher-end users who have more than one device and given a population of almost 1.3 billion, this conservative rate of growth means a lot of computers to be disposed of in that time.


As such, their research suggests that there will be 126 million desktop computers and 900 million notebook computers that will be past their life expectancy by the year 2025. They suggest that computer recycling capacity will need to be able to cope with more than a billion PCs by 2020. "These results will help waste management authorities in planning appropriate infrastructure and facilities for handling, recycling and disposal of this hazardous waste," the team says. "This analysis does not address distribution of obsolete computers for reuse, recycling and landfill options nor their storage time, which is an important issue to resolve in the future."
Advertisement
Electronic waste or e-waste is the collective name for discarded electronic devices and is a growing problem worldwide as users and businesses upgrade computer equipment and other devices. Given that many of the electronic and other components of such equipment use toxic elements, including arsenic, cadmium, lead, mercury and various plastics and polymers that can also degrade to toxic compounds, there is a pressing need to manage e-waste with consideration for human health and the environment.

Toxic Computer Waste may Be Fuelling Your Car Some Day
It may sound bizarre, but the circuit boards that make your computer work efficiently may be ......

Brain Works Differently from a Computer in Recognizing Speech Sounds
Brain applies a set of rules to determine whether combinations of sounds and words used in spoken .....

Warhol Digital Art Found by US Computer Club
A computer club at an American university in Pittsburgh has found a dozen previously unknown works ....