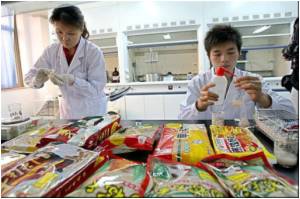 Taiwan has passed tougher food safety law, after the latest tainted food scandal on the island.

A new clause imposing the maximum life imprisonment and a fine of up to Tw$20 million ($666,000) has been added if such an offence results in death, the health department said.

Several large food companies have recently recalled some products suspected of containing either the chemical maleic anhydride, an industrial preservative or expired ingredients.

Taiwanese doctors have cautioned that consuming too much maleic anhydride, which is used to make food chewy, can lead to kidney failure.

In 2011, Taiwan launched a massive recall of sports drinks and juices after some products were found to be tainted with a banned chemical in its worst food scandal in decades.

Several countries at the time had banned imports of certain food items from Taiwan containing the DEHP, a chemical used to make plastics, that experts say can cause hormone problems in children.

Food Safety Agency Says Plastic Chemical may Expose Foetuses to Cancer
Use of bisphenol A - a plastic chemical may expose unborn children to breast cancer later in life, ....

European Food Safety Agency Launches Public Consultation on Sweetener Aspartame
A public consultation on its draft scientific opinion regarding the safety of the artificial ......

New National Standards of Food Safety in China by 2015
Chinese health officials have revealed that they hope to set up national standards of food safety, ....

China Food Safety Scandal Widens to Oil and Peanuts
A cancer-causing toxin in peanuts and cooking oil that was only recently discovered in milk has ......