Toronto Homeless TB Patients Die Within A Year of Diagnosis 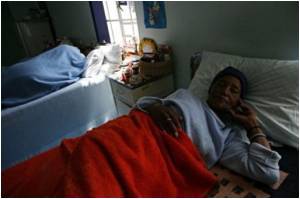 A new study in Toronto has found that one in five homeless people with tuberculosis die within a year of their diagnosis.

And that number remains unchanged over the last decade despite recommendations calling for greater improvements in prevention and control of tuberculosis in homeless shelters.

The 10-year study, led by St. Michael's Hospital's Kamran Khan, also found a growing proportion of tuberculosis cases in Toronto's homeless shelters are in immigrants, raising the risk that dangerous drug resistant strains of tuberculosis could enter the shelter system.


The study found nearly 40 per cent of all tuberculosis cases in the homeless were in immigrants.

About 56 per cent of all infections in immigrants involved strains that were not known to be circulating in the city, and were likely acquired in other parts of the world where drug resistance is common.

Drug resistance is often a problem in malaria, tuberculosis, HIV, sexually transmitted diseases and hospital acquired diseases. Judicious use of antibiotics can control the problem.
Advertisement
If a drug resistant strain of tuberculosis were introduced into the shelter system, it could set off an outbreak that would have serious public health implications and be very difficult to control.

Financial resources to manage such an outbreak would dwarf the costs of strengthening preventive measures today, the researchers warn.

The finding has been published in the March issue of the journal Emerging Infectious Diseases.

Researchers have found out that the Gambian pouched rats can smell the tuberculosis bacteria in a sputum sample.
Advertisement
<< PneumoniaCheck Assists in Better Diagnosis of Pneumonia
Risk of Hemorrhagic Stroke at Younger Age High in Native Ha... >>

World Tuberculosis Day 2010 - "On the Move Against Tuberculosis, Innovate to Accelerate Action"