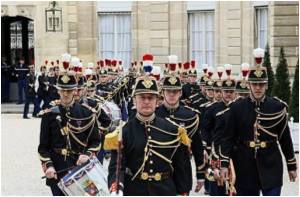 A staggering 19,000 euros ($24,400) was fetched at a Paris auction by a bloodstained cloth allegedly belonging to Louis XVI, the French king who was beheaded after the 1789 revolution.

Kept in a miniature coffin, the cloth was estimated to go under the hammer for between 4,000 and 6,000 euros.


The Coutau Begarie auction house said the cloth had been scooped by a French collector who is fascinated by the former monarch.

Parisians had jostled to take souvenirs after the execution including snippets of his hair. They also dipped their garments or cloth in the pool of blood left near the guillotine.
Advertisement
The small coffin also included a small pouch of sand which an expert said had "probably been collected from the ground at the foot of the guillotine where the king was beheaded".

He added, however, that only a DNA test on the sample of the stained cloth could prove if it really contained Louis XVI's blood.

A silver buckle from the king's shoe was sold for around 4,400 euros to the same collector.

Kerry Taylor to Auction Off Princess Dianas Evening Dresses
Ten of the late Princess Diana's evening dresses are set to be auctioned next week at London's ......