Signature of King Richard III Up for Auction in US 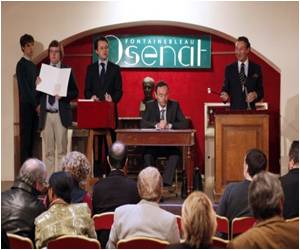 A document signed by Britain's King Richard III will be auctioned in Los Angeles next week, two months after scientists found the ancient royal's remains under a modern-day car park.

The document, signed by the British royal before he took the throne, is believed to be one of only three Richard III documents to go under the hammer in the last three decades, said Nate D Sanders auction house.

"This document is signed by Richard when he was Duke of Gloucester, a position given to him by his brother, King Edward IV," said Sanders. "This is especially ironic because it was Edward's sons that Richard reportedly killed in the Tower of London."


The signet-sealed document is signed "R. Gloucestre," and the reference to him as "Constable and Admyral of England" dates it to somewhere between 1473-77, when the British royal was in his 20s, Sanders said.
Advertisement
In the document, Richard intervenes in a land dispute between Ralph Neville, 2nd Earl of Westmorland, and some of his tenants.

At the time Richard was a powerful landowner and political force to be reckoned with in the north of England, in the process of establishing his future reign as King of England.

British scientists confirmed in February that a skeleton found under a car park in the English city of Leicester was that of the controversial king, widely depicted as one of history's most notorious villains.

The discovery has caused huge excitement among historians, as it provides firm evidence about a monarch whose life has been shrouded in controversy since his death at the Battle of Bosworth in 1485, at the age of 32.

The find also triggered a row between those who want the former monarch buried in York, and those who wish for him to be interred in Leicester, where his remains were found.

British Study: Disabled at Greater Risk of Being Victims of Violence
A British study says that physically and mentally challenged people are more prone to being victims ...