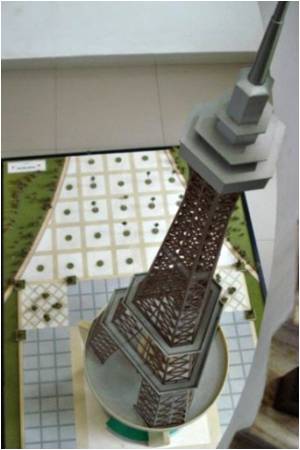 Japan can boast the world's tallest free-standing television tower as of Tuesday, when the under-construction Tokyo Sky Tree rose to a height of 601 metres (1,971 feet).

The steel structure eclipsed China's 600-metre Canton Tower, which opened in Guangzhou in September -- although both are shorter than the world's tallest building, Dubai's 828-metre Burj Khalifa skyscraper.

Dozens of visitors lined up to ascend the viewing deck of the world's tallest tower in Dubai on Monday, which reopened after an elevator breakdown forced its closure only a month after
Advertisement

The Tokyo Sky Tree rose to 601 metres at 1:29 pm (0429 GMT), when workers lifted part of its antenna section into place, said Tobu Railway, the main investor in the 65-billion-yen (790-million-dollar) project.


Already a popular landmark in eastern Tokyo, the broadcast tower is scheduled to reach its top height of 634 metres this month and be completed by the end of the year.

At 6ft 8in, 'Amazon' Eve is the World's Tallest Model!

Amazon Eve, who is the world's tallest model at 6 feet 8 inches, is living the high life these days.
Advertisement
"We are delighted to see the tower become the world number one," said Tobu Railway spokesman Shota Mitsui. "But we still have more work to do, and we will continue enforcing safety first in completing the project."

To keep the structure safe during Japan's frequent earthquakes, the tower boasts a cutting-edge anti-seismic design, including pilings that fan out underground like the branches of a tree.

The tower consists of two parts, an outer steel frame and an inner shaft of reinforced concrete, which can move separately to cancel out their seismic energies -- a design idea borrowed from ancient Japanese pagodas.

A year ago, the tower surpassed the current television and radio transmission tower -- the 333-metre red-and-white Tokyo Tower, a symbol of Japan's post-war "economic miracle" -- as the country's tallest structure.

He added that some 25 million people a year are expected to use commercial facilities inside the tower compound, including 300 shops and restaurants as well as an aquarium, a planetarium and a dome theatre.

An Indian boy , just two and a half years old ,is standing tall at 4ft 5 ins and is believed to be the tallest toddler in the world.
Advertisement
<< Boffins Locate Genetic Switch To Increases Muscle Blood Sup...
The Future of Window-Shopping Now Decided at Giant German T... >>