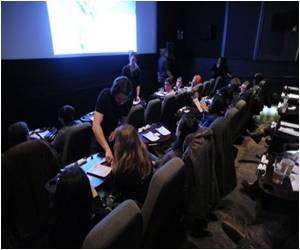 The original Godzilla -- a man in a rubber suit -- has hit screens in Japan again, as relevant as ever as the digitalised Hollywood reboot stomps its way to box office success around the world.

The 1954 classic, which spawned more than two dozen follow-ups, has been cleaned up for a two-week run in Tokyo to mark the 60th anniversary of the monster from the deep.

Watching a movie where an antagonist is about to maim the character, we tend to get more interested.
Advertisement

Despite the shaky sets and the all-too-obvious latex costumes, a new generation of movie-goers declared themselves impressed.


"I was really surprised to see a Tokyo that isn't the current, neat Tokyo, but was just some 10 years after war, trampled again," said Kenichi Takagi, 44, who took along his 10-year-old son.

Researchers from Aalto University in Finland have revealed that movies can unite brains, which means that when watching a movie, human brains respond in a way similar to other viewers' brains.
Advertisement
Visuals and audio have been given a scrub to remove some of the speckles and pops that cinema-goers are now unused to experiencing, although there is no hiding the fact that the creature is really a heavily-sweating actor in a suit.

But the movie's enduring popularity six decades on is testament to the continuing resonance of its themes of human helplessness in the face of forces that cannot be controlled.

The monster movie was a mega-hit, drawing 9.6 million viewers in the days before television sets were commonplace in Japanese households.

In the fictional world, the creature was awakened by a hydrogen bomb test, rising out of a roiling sea and swimming to Japan where it crushes Tokyo, a walking, radiation-breathing analogy for nuclear disaster.

The reference was clear: that same year the United States had carried out its hydrogen bomb test at Bikini Atoll in the South Pacific, exposing a Japanese fishing boat to nuclear fallout, sickening the 23 crew and eventually killing the captain.

It was also less than a decade after Japan surrendered in World War II following the US atomic bombings of Hiroshima and Nagasaki in 1945.

But while the creature stands emblematic of the way that humans have courted death by their tinkering, it is also the product of a country prone to natural disasters.

"We grow up thinking since our childhood that there are typhoons, earthquakes and other things that humans cannot control. It's the same with Gojira," said artist Yuji Kaida on the sidelines of a Tokyo exhibition of his paintings on Godzilla.

The point of the monster -- and perhaps the reason why there are so many sequels -- is that it can never really be defeated. Like other destructive forces of nature, people just have to watch it come and go, hoping to survive.

Sadamitsu Noji, 34, said he had been a fan of the creation for two decades, and sees it as a blank canvas onto which cinema-goers can project.

"Besides its underlying anger, Godzilla embraces various feelings... Each viewer can see his own emotions in Godzilla," he told AFP.

Actor Akira Takarada, who starred in the original film, said he had seen the new version twice, and agreed that Godzilla is a complex creation, worthy of its place in history.

"I realised anew that Godzilla isn't simply a destroyer but that he himself is a victim of an atomic bomb... I cannot help feeling sympathy for him," the 80-year-old told reporters.

That status of victim resonates even louder in contemporary Japan, where tens of thousands of people remain displaced by the tsunami-sparked disaster at Fukushima in 2011.

Director Gareth Edwards said Fukushima had been impossible to ignore.

"There is a strong tradition in science fiction where it's not really about the future but it's often about the present, the time in which the films are made," he said.

"We didn't want to literally make a film about the events that happened in Japan but it's nearly impossible to make Godzilla, which is a symbol of a cautionary tale about using nuclear power, set in Japan, and not raise the question."

Discussing and watching movies about relationships was found to cut the three-year divorce rate for newlyweds in half, reveals research.
Advertisement
<< Young Blind Footballers Take to the Pitch
Fashion Follows Food Trucks, Hits the Roads in the US >>

Calculate Ideal Weight for Infants Daily Calorie Requirements Drug Side Effects Calculator Drug Interaction Checker Find a Doctor Color Blindness Calculator Accident and Trauma Care The Essence of Yoga Iron Intake Calculator Hearing Loss Calculator
This site uses cookies to deliver our services. By using our site, you acknowledge that you have read and understand our Cookie Policy, Privacy Policy, and our Terms of Use