The Key to Looking Young Could Be Held By Marine Animals 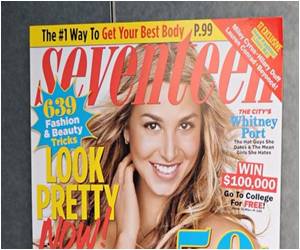 According to scientists sea cucumbers and sea urchins are able to change the elasticity of collagen within their bodies, and could hold the key to maintaining a youthful appearance. The scientists are from the Queen Mary, University of London.

The researchers investigated the genes of marine creatures such as sea urchins and sea cucumbers, known as echinoderms. They found the genes for "messenger molecules" known as peptides, which are released by cells and tell other cells in their bodies what to do.

Tracking, locating and interviewing nearly 2,000 youths up to five years after they were released from juvenile detention in Chicago. It was a study everyone thought couldn't be done.
Advertisement

The study was published online in the journals PLOS One and General and Comparative Endocrinology.


Project leader Professor Maurice Elphick, from Queen Mary's School of Biological and Chemical Sciences, said: "Probably the most exciting discovery from our research was finding genes encoding peptides that cause rapid stiffening or softening of collagen in the body wall of sea cucumbers.
Advertisement
"Although sea urchins and sea cucumbers may not look much like us, we are actually quite closely related to them. As we get older, changes in collagen cause wrinkling of our skin, so if we can find out how peptides cause the body wall of a sea cucumber to quickly become stiff or soft then our research might lead to new ways to keeping skin looking young and healthy."

The scientists analysed the DNA sequences of thousands of genes in the purple sea urchin Strongylocentrotus purpuratus and the edible sea cucumber Apostichopus japonicus and specifically searched for genes encoding peptide messenger molecules. Rapid advances in technology used to sequence genes made the research possible.

"When the human genome was sequenced over a decade ago it cost millions of pounds - now all of the genes in an animal can be sequenced for just a few thousand pounds," Professor Elphick said.

"We also found that sea urchins have a peptide that is very similar to calcitonin, a hormone that regulates our bones to make sure that they remain strong," Professor Elphick said.

"So it will be fascinating to find out if calcitonin-type peptides have a similar sort of role in spiny-skinned creatures like sea urchins."

"These types of advances in basic science are fascinating in their own right but they are also important because they underpin the medical breakthroughs that lead to improvement in the quality of people's lives."

Source: Eurekalert
Advertisement
<< Framework to Assess Long-term Impact of Facial Transplant O...
Way to New Targeted Therapy Pointed Out By Breakthrough in U... >>