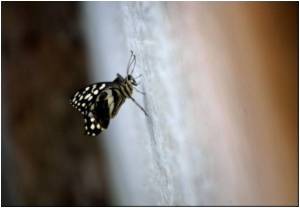 The pioneer of Taiwan butterfly research, Chen Wei-shou remembers being spell-bound when as a boy of six he first saw "a flower that could move". A life-long obsession had begun.

Now aged 81, Chen can look back at a long career which has spanned seven decades, 77 books and has culminated in the establishment of one of Asia's largest butterfly museums.

The first casual link between climate change and the timing of a natural event, which is namely the emergence of the common brown butterfly, has been established by scientists.
Advertisement

By any measure, his academic life has been successful, and yet, when he looks back, his recollections are tinged with sadness, as butterflies which were once abundant have become rare in many parts of Taiwan.


In some parts of Taiwan, Chen said, butterfly populations are now one hundredth of the level before industralisation.

"Taiwan used to be a paradise of butterflies. When I was a kid, one could easily spot butterflies even in Taipei," Chen said.

Beating the air with her homemade net, Aicha Ali chases a swirling black and turquoise butterfly. Far from indulging in a frivolous pastime, this Kenyan mother is earning crucial family
Advertisement
Times have changed, and now one of the only places to see butterflies in Taiwan's capital is at the museum he set up in 1972 on the campus of Cheng Kung High School, where he taught for a generation until retiring in 1996.

Taiwan's butterfly habitats were destroyed with breath-taking speed as the society transformed itself from an agricultural society to an industrial powerhouse in the post-war years.

"A lot of original forest was cleared out to make way for roads, homes and factories, and for the development of farmland," said Lin Kuo-chang, an official with the Council of Agriculture.

"The widespread use of pesticides by farmers was also responsible for the massive disappearance of butterflies on the island."

Especially the plains along the west coast of Taiwan, where the island's economic miracle was forged, saw populations drop precipitously and became what Chen termed "a butterfly desert".

But there was also another reason why butterfly populations came under pressure from the 1950s to the 1970s.

Families across the island found a new source of income, either catching butterflies or working in processing plants turning them into decorations that were shipped in one of the island's great export successes of the boom years.

At the peak of the industry, Taiwan exported 30 million butterflies a year, especially to Japan, but also the United States and Europe.

Hard trade statistics are difficult to come by, but thousands of Taiwanese derived their entire income from butterflies for years.

"Taiwan sold so many butterflies and butterfly products that the island ended up being called the 'butterfly kingdom'," Chen said. "Whether you like it or not, it supported many families."

Nearly one in five butterfly species can only be found in Taiwan, but concern about their survival is mounting.

For one species -- the great purple spot butterfly -- the concern comes too late, and it has already become officially extinct in Taiwan.

Three others -- the Broad-tailed Swallowtail, Magellan's Iridescent Birdwing and the Great Purple Emperor -- are now on the endangered list and subject to active conservation efforts.

In one of many signs of the new-found concern, authorities have created butterfly sanctuaries and are trying to raise awareness in information campaigns.

And every spring, they shut one lane of a busy road in central Taiwan to protect millions of purple-spot butterflies on their seasonal migration.

Chen, for one, has replaced his nets with cameras. His first documentary, titled "Dancing queens of the Nature," scooped the coveted "Golden Harvest" award in 1978, and since 1981, the only butterflies he has caught are the ones caught on film.

"My collection of specimens had exceeded the museum's capacity. Besides, I felt I had collected almost every species that could be discovered in Taiwan," he said.

"Butterflies helped Taiwan survive a difficult period. Now Taiwan people should do something in return for the sacrifices made by the butterflies."

An international team of researchers has found natural selection in a tropical butterfly species that fought back.
Advertisement
<< New Peptide Synthesised To Kill Melanoma Cells
Role Of Exercise And Androgens On Nerve Damage Repair >>