Super-Boosting Approach to Treat Children Living With HIV and TB 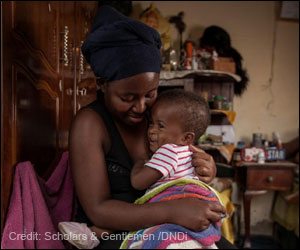 A recent study in South Africa by a non-profit research and development organization Drugs for Neglected Diseases Initiative (DNDI) has released the study results which will make it easier for healthcare professionals to treat children who are living with HIV and co-infected with tuberculosis (TB).

The research study, presented as a late-breaker this week at the Conference on Retroviruses and Opportunistic Infections (CROI) in Seattle, will provide essential evidence and data to counter the negative interactions between two critical HIV and TB treatments.

Researchers find the preventive treatment beneficial in protecting the children, who are in close contact with multidrug resistant tuberculosis affected patients, from acquiring the disease.
Advertisement
‘Children living with HIV and TB can be treated with a super-boosting approach that counters negative interaction between key HIV and TB drugs.’

"TB is extremely common in children with HIV but until now, when a child has both diseases, we simply did not know for certain if our approach to dosing was correct. This is crucial to ensure long-term control of the HIV virus and keep kids alive," said Dr Helena Rabie from Stellenbosch University and lead investigator of the DNDi study. "These kids are extremely neglected: HIV-positive children have fewer treatment options and in many cases cannot switch to different antiretrovirals when taking concomitant TB treatment."


Protease inhibitors such as lopinavir (LPV) form a key component of HIV treatment, but must be "boosted" with ritonavir (RTV) to ensure they inhibit the virus. But when children are also treated for TB, the drug rifampicin, which forms the backbone of TB treatment, reduces the concentration of RTV and hence the effectiveness of LPV. To counteract this effect, the amount of ritonavir in the lopinavir/ritonavir (LPV/r) combination must be increased, a procedure known as "super-boosting".

Researchers at the University of Pittsburgh have been developing a new way of culturing tuberculosis bacteria, which could lead to new insights and treatments for TB.
Advertisement
An earlier study had suggested that super-boosting LPV/r with ritonavir up to a 1:1 ratio during a child's simultaneous HIV and TB treatment, as opposed to the commonly used 4:1 ratio used during treatment for HIV alone, was effective. But the study included only 15 children. DNDi and partners aimed to consolidate the evidence around the safety and effectiveness of super-boosting through a larger study including 96 children - 30 of whom were under one year of age at enrollment - across five sites in South Africa.

The final results presented this week at CROI show that this approach counteracts the negative interactions between LPV/r and rifampicin, easing the co-administration of HIV and TB treatment for this particularly vulnerable population.

"This study brings the scientific proof needed so that health workers can give children the right dose and ensure that their HIV and TB treatment works," said Dr Marc Lallemant, Head of DNDi's HIV program.

Interim results from the study were presented by DNDi to the World Health Organization (WHO) guidelines review committee, which recommended super-boosting of LPV/r in TB/HIV co-infected children in 2016.

But further uptake by other countries of this therapeutic advance is hampered by the short shelf-life of pediatric RTV, as well as difficulties giving both LPV/r and stand-alone RTV to children, linked to their high alcohol content and extremely bitter taste. In Kenya and Uganda, DNDi and partners are piloting a more child-friendly formulation of LPV/r that comes in the form of pellets. In a separate study due to start in South Africa, DNDi and partners will pilot super-boosting in children co-infected with TB and HIV using a new solid RTV formulation.

"DNDi's ultimate goal is to deliver a simple, first-line antiretroviral regimen that overcomes the many different barriers that stand in the way of giving treatment to infants and young children," said Dr Marc Lallemant. "With our industrial partners we're aiming to develop an easy-to-use '4-in-1' fixed-dose combination that is palatable, does not require refrigeration, and that thanks to super-boosting can address drug-drug interaction with medicines for TB."

Tuberculosis, caused by Mycobacterium tuberculosis, primarily affects the lung. It may spread to other organs.
Advertisement
<< Long Life and Stress Resistance are Connected at the Cellul...
Statin Side Effects are Strongest Predictors of Failure to ... >>

The biggest sea change in the national AIDS response has been a strong demonstration of political will and leadership to address the massive HIV epidemic.

Diaphragmatic Hernia Hearing Loss Calculator Indian Medical Journals Nutam (400mg) (Piracetam) Calculate Ideal Weight for Infants Drug Side Effects Calculator How to Reduce School Bag Weight - Simple Tips Vent Forte (Theophylline) The Essence of Yoga Sinopril (2mg) (Lacidipine)
This site uses cookies to deliver our services. By using our site, you acknowledge that you have read and understand our Cookie Policy, Privacy Policy, and our Terms of Use