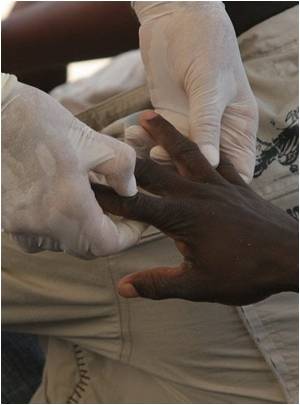 A study to be presented Saturday, April 30, at the Pediatric Academic Societies (PAS) annual meeting in Denver says that when adolescent females visit a pediatric emergency department with complaints that may signal a sexually transmitted infection (STI), white youths are less likely to be tested than blacks.

Researchers, led by Carolyn K. Holland, MD, MEd, previously found that pediatric emergency medicine physicians are less likely to ask adolescent white females about their sexual history than black adolescents. Their next step was to determine if there is any difference in STI testing between white and black patients.

To do this, trained medical professionals reviewed the charts of 349 youths ages 13-21 years who visited a pediatric emergency department over a two-month period with an abdominal, urinary or gynecologic complaint that suggested they may have an STI. The reviewers did not know the purpose of the study, and any information on the chart that would identify the patient's race was blacked out.


Patients were excluded from the study if they were pregnant, suffered from trauma, were medically unstable, had a developmental delay, or were suspected sexual or physical abuse victims.

Reiters syndrome, Reactive arthritis or Reiters disease is an autoimmune condition that has several names.

The reviewers collected information from the charts on chief complaints, whether the patient's sexual history was obtained, and whether STI diagnostic testing and a pelvic exam were performed. Other information collected included health care provider demographics, patient demographics, STI testing results, and presence of a chronic condition that could cloud concern for STI as the cause of the complaint (i.e., kidney stones, multiple abdominal surgeries, Crohn's disease/ulcerative colitis).

After controlling for variables that might influence whether a patient was tested for an STI, including chief complaint, age, insurance status, provider type and history of STIs, the following factors were associated with increased odds of receiving STI testing:black race, being sexually active and having a gynecologic chief complaint.

"We are testing fewer white female adolescent patients in pediatric emergency departments who have complaints that could be consistent with an STI than black patients with similar characteristics," said Dr. Holland, an emergency medicine physician at Cincinnati Children's Hospital Medical Center and assistant professor of clinical pediatrics and emergency medicine at the University of Cincinnati. "As STIs are only able to be definitively diagnosed with testing, this disparity raises the concern that white adolescent females are at risk of being under-evaluated for STIs and therefore under-treated for STIs."
Source: Eurekalert

Sex is fun but involves health risks such as sexually transmitted diseases (STDs or unplanned pregnancy specially in those who have multiple partners or in those having unprotected sex.
<< Infants at Risk Due to Maternal Obesity
Study: EDs Should be Aware of Sexually Transmitted Infectio... >>

Diaphragmatic Hernia Pregnancy Confirmation Calculator Drug - Food Interactions Accident and Trauma Care How to Reduce School Bag Weight - Simple Tips Find a Doctor Blood - Sugar Chart Calculate Ideal Weight for Infants Sanatogen Hearing Loss Calculator
This site uses cookies to deliver our services. By using our site, you acknowledge that you have read and understand our Cookie Policy, Privacy Policy, and our Terms of Use