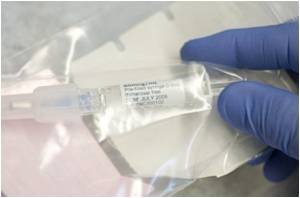 Researchers have said that small intravenous drips commonly used in the hand or arm do not need to be moved routinely every 3 days.

A randomized controlled trial comparing regular relocation with relocation on clinical indication found that rates of complications were the same for both regimens.

Claire Rickard, from Griffith University, Australia, worked with a team of researchers to carry out the study with 362 patients at Launceston General Hospital, Tasmania.


"Recommended timelines for routine resite have been extended over the past three decades from 24 to 72 hours. Currently, 72- to 96-hour resite is recommended. Even with these extended durations, such policies still cause increased workload in hospitals, where the task of removing and replacing well-functioning IVDs generally falls to busy nursing and junior medical staff. Our results indicate that the average duration of IV therapy is 5-6 days and that many catheters can remain complication-free for this period, or even longer," she said.

Tapeworms are a group of parasites that depend on humans for growth and cause intestinal infection in them. Tapeworm symptoms and signs include stomach pain, loss of appetite, weight loss.
Advertisement
The researchers found that complication rates between the groups were not significantly different.

The policy of resite on clinical indication led to one in two patients needing only a single cannula to receive treatment, whereas a 3-day change policy resulted in one in five patients having this scenario, with the rest requiring multiple cannulations and therefore additional pain and inconvenience.

"The routine resite of peripheral IVDs increases patient discomfort and healthcare costs, but does not reduce IVD complications as has traditionally been thought," said Rickard.

The study has been published in the open access journal BMC Medicine.

Sanatogen Drug - Food Interactions Post-Nasal Drip Accident and Trauma Care Drug Side Effects Calculator Find a Doctor Indian Medical Journals Loram (2 mg) (Lorazepam) How to Reduce School Bag Weight - Simple Tips Find a Hospital
This site uses cookies to deliver our services.By using our site, you acknowledge that you have read and understand our Cookie Policy, Privacy Policy, and our Terms of Use  Ok, Got it. Close
×