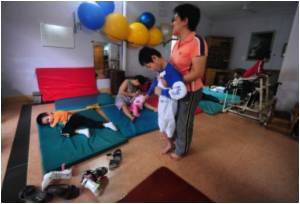 The newly identified misalignment can affect how surgeries of the pelvis, spine and surrounding structures are performed, the researchers say.

Bell''s palsy is facial nerve disorder that causes weakness of the muscles on one side of the face. Its cause is unknown but most people make a full recovery within 8 to 12 weeks.
Advertisement

Previous studies of patients with cerebral palsy have reported asymmetry above the pelvis and misalignment of the hips, but this new report, the researchers say, is the first one to show misalignment between the two sides of the pelvic bone itself.


Most children with severe cerebral palsy have significant spinal curvatures (scoliosis) that often require surgery. Because the pelvis and the spine are connected, any surgical procedures to correct scoliosis should take into account the possibility of a misaligned pelvis, the investigators say. The degree of the asymmetry, they add, should dictate the size, type and placement of the surgical screws and rods used to stabilize the spine and pelvis in such corrective procedures.

While performing surgeries to correct scoliosis, Sponseller started noticing a recurrent feature among his patients with severe cerebral palsy - a pronounced asymmetry between the left and right plates of the pelvic bone.

To quantify the problem, Sponseller performed three-dimensional CT scans on all of his cerebral palsy patients undergoing scoliosis surgery over one year. All 27 patients had asymmetric pelvises with misalignment of the pelvic bones was greater than 10 degrees. Comparing these images with pelvic-bone scans of children without cerebral palsy, the researchers noted that all of them had either no misalignment or only mild asymmetry of less than 10 degrees.

Twenty-three of the 27 children (85 percent) with cerebral palsy also had windswept hips, a hallmark feature in CP patients marked by one hip facing outward and the other one rotated inward. Children with windswept hips had more pronounced pelvic asymmetry than children without windswept hips, the researchers found.

The study will be published online in the Journal of Pediatric Orthopaedics.

Despite the low risk of cerebral palsy among babies born through IVF, the issue should be taken seriously, say scientists.
Advertisement
<< Gene That Mediates Response to Key Drug is Often Mutated in...
Scientists Develop First International Index to Predict Sui... >>