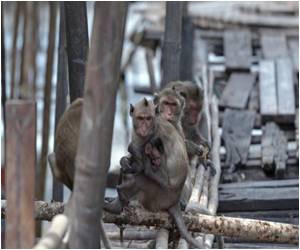 Chimpanzees are brainier that humans reveals a study by a Japanese researcher.

Tetsuro Matsuzawa, a professor at Kyoto University's Primate Research Institute in Inuyama, has gained unprecedented insights into the workings of the primate and human mind, the Guardian reported.

During a short-term memory test which was conducted publically in 2007, Ayumu, a 13-year-old chip, demonstrated amazing powers of recall and easily beat her human competitors, who had been in training for months.


For the tests, Ai, 36-year-old chimp, and Ayumu, and two other pairs of a mother and offspring, were shown the numerals 1 to 9 spread randomly across a computer screen and their task was to touch the numbers in ascending order.
Advertisement
In order to complicate matters, the game was altered so that as soon as the chimps touched the digit 1, the remaining eight were immediately masked by white squares, therefore to complete the exercise, they had to remember the location of each concealed number and, again, touch them in the correct order.

In another even harder version, five numbers appeared on the screen before turning into white squares.

It was found that the animals and their human counterparts displayed the same degree of accuracy about 80 percent when the numbers remained visible for seven tenths of a second. However, when the time was reduced to four tenths of a second, and then just two tenths, Ayumu maintained the same level of accuracy, while his mother, Ai, and the human volunteers struggled.

Answering to why do the chimps have such vastly superior working memories, Matsuzawa said that this is because as humans evolved and acquired new skills, particularly the ability to use language to communicate and collaborate, they lost others they once shared with their common simian ancestors.

For the chimps, the ability to memorise the location of objects is critical to their survival in the wild, as they have to be able to think quickly because there are other hungry chimps behind them.

Matsuzawa said that through the cognitive tests they have concluded that chimps have extraordinary memories and they can grasp things at a glance.

Chimpanzees Have 5 Universal Personality Dimensions
Strong support is being provided by a new research for the universal existence of five personality ....

Chimpanzees Play the Ultimatum Game
At the Yerkes National Primate Research Center, Emory University, researchers are the first to show ...