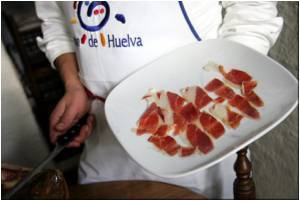 With New York, you never know what to expect. Carrot buns, lemon macaroons, golden veal cutlets and tamarind ice cream spiked with balsamic vinegar are taking the city's trendy citizens by storm, but not at restaurants, but street carts. Yes, working their way through the Big Apple, these carts have traded working-class fare for global delicacies.

China's ever-growing taste for luxury goods is extending into the culinary world -- and that's good news for Jean-Marie Vallier, who runs a duck farm and foie gras factory outside Beijing.
Advertisement

The tweets point gastronomes to where street carts serve up the best fare of the day.

Iberian ham, a staple of Spanish menus and Christmas feasts, is about to go on sale in the United States for the first time, at least for those who can afford it.
Advertisement
Voss, who says the brutal economic recession pushed him to make a career change and open a street cart in Manhattan, counts some 5,400 followers on Twitter.

Dozens of them come each day to grab a bite of schnitzel -- breaded meat or fish cutlets -- from "Schnitzel & Things," a brown and white cart Voss started with his 35-year-old brother, Gene.

"I had just been hired as an investment banker in Vienna when the recession began: last hired, I was the first fired," recalled Voss, who also graduated from New York University's Stern School of Business.

The Ukrainian-born entrepreneur decided to sell schnitzel after becoming a fan of the cutlets in Vienna. He serves them hand-pounded, lightly breaded and "fried to golden perfection" with mashed potatoes or french fries.

"Here the veal is too expensive, so I buy chicken or beef," he told AFP while writing down orders from his clientele mainly consisting of young lawyers and bankers working in the neighborhood.

"But everything is top quality, the bread crumbs are put at the last minute, the frying oil is organic and renewed every day."

In addition to Voss's brother, two cooks work up the stoves in the back of the cart. They serve about 200 meals per day, each sold for about 10 dollars.

A little over a dozen "gourmet" carts work up New York's streets, accounting for less than 10 percent of the Big Apple's street food industry.

Many restaurateurs struggle to enter the market, only succeeding if they manage to prevail over an arduous process to obtain permits from the city.

Grant Di Mille, who runs his "Street Sweets" cart with his wife Samira Mahboubian had to jostle with the ice-cream men "mafia" to keep his buns, croissants and cupcakes business open.

He and his wife worked in marketing for two decades before launching their street cart nearly two years ago.

"We wanted to have our own business," said Iranian-born Mahboubian, who was inspired by her mother's confections.

The couple finally got their permit, then made some friends in the New York police force. Their business is now thriving.

They prepare sweets for events organized by companies and sports clubs, and also rent out a second truck to clients.

Douglas Quint opted to open his "Big Gay Ice Cream Truck" in the summers to supplement his income as a bassoonist in Boston in winter.

"People love ice creams but all the others serve the same thing. I use a better ice cream, add a lot of layers. I convince people to try it and they love it! It's like running an open kitchen," said Quint, 39.

"The trend is growing," he concluded as he prepared to travel to San Francisco for a conference on street food.

In a plush Bangkok ballroom one evening in May, hoteliers, ambassadors, celebrity chefs and socialites gathered to dine on foie gras, oysters and sushi while they talked about promoting
Advertisement
Advertisement