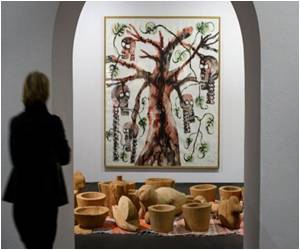 Against the backdrop of a battered Greek flag, in wall art covering the side of a school building in a working-class Athens suburb, a giant lion roars.

The creation is one of many examples of street art across the Greek capital expressing the despair of ordinary people after four years of government belt-tightening at the behest of international creditors.

Natural Engineering Can Save An Earth On The Brink Of Inhospitability

A paleontologist has suggested that the Earth might be ultimately inhospitable to life, and that life itself might be the primary reason for shutting down Earth as a habitable planet.
Advertisement

The artist, BANE, is among around 60 contributors to Athens' second annual street art festival, using some 30 public buildings in the run-down districts of Nikaia, Rentis and Tavros as their canvases.


Several of the works defy the three-month festival's title "Crisis, What Crisis?" apparently aimed at steering artists away from the gloom of soaring unemployment and sweeping poverty with Greece beginning to make timid steps towards recovery.
Advertisement
"The notion of reconquering public space predates the crisis," argues a young artist who uses the pen name This Is Opium.

Among foreign participants in the festival is Franck Duval of France, originally a collage artist who took up street art in 2006. "We are all paying for this crisis, whether in Greece or elsewhere," he said.

Duval, who is taking part for a second time and helped paint a mural inspired by "Zorba the Greek", added: "The walls of Athens deserve a little more colour and joy."

Panos Haralambous, a vice dean of the Athens School of Fine Arts which is staging the event, told AFP: "We seek to evoke reactions, no longer just in studios but outside. Art is not just for the few."

Street art has "exploded in the city these past six years," he said. "It is a form of protest that takes the artist out of his studio.

"Young people are looking for ways to express themselves in hard times, and street art is an ideal vehicle for that," he added.

Greece stood on the brink of bankruptcy in 2010 when international lenders came to the rescue with the first of two bailout packages totalling 240 billion euros ($330 billion).

In exchange, Athens was forced to undertake drastic reforms including wage, pension and job cuts to bring down its runaway public deficit -- prompting often violent protests.

Organiser Gogo Kolivira described the artists' brief as "interpreting the news in the public space" but with a view to generating "optimism and hope".

"The aim is to keep street art a vital part of the city," said fine arts student Sotiris Gardiakos.

Last year's works, now on display at the School of Fine Arts, were overwhelmingly inspired by the anti-austerity protests that rocked the country between 2010 and 2012.

One piece depicts a malnourished child with the slogan "Need Food, Not Football" stencilled across his distended belly, while another titled "Death of Euros" shows six men carrying a stack of oversized euros, evoking pallbearers carrying a coffin.

The event, which enjoys support from the French, Israeli and Swiss embassies, closes at the end of June with a photo exhibition of graffiti and slogans that have appeared in Athens since the start of the crisis in 2010.

Separately, the private Onassis Foundation is currently showcasing some 40 street art works including spray-painted cars in a show titled "No Respect".

Source: AFP
Advertisement
<< New Analysis on Californians' Experiences With Long-term Ca...
Scientists Find Kids may be Able to Tell When Adults are Sa... >>