Star Treatment at Italian Buffalo Dairy With Jazz and Massage 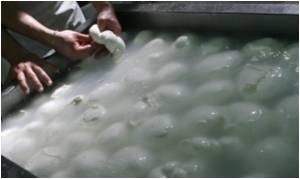 As jazz piano tinkles out of the speakers, a queue forms for rub-downs. This is the scene as some of the best buffalo mozzarella in the world starts with in-stable VIP treatment.

Ducky, Sweety and Lady lumber towards the sound system, attracted to the smooth Keith Jarrett licks at the exclusive Tenuta Vannulo dairy in southern Italy.

"The music helps them produce more milk because the animal feels more relaxed," said 25-year-old Valentina Michelucci, a tousle-haired stable hand, who said she wants to try out some disco hits too.


"They're very curious when they hear it."

The half-tonne black water buffaloes spend their days lounging on rubber mattresses, munching on organic hay or looking forward to vaporised showers that form a fine cooling mist from overhead pipes.
Advertisement
When they feel the urge, they saunter into a special pen for automatic milking by a unique machine that knows the exact shape of each udder thanks to a code emitted by the electronic collars the buffaloes wear.

Or they can head to large round brushes that twist into action when the animals come into contact with them, providing a soothing back and shoulders massage.

"Animals have to be treated well to produce stress-free milk," Antonio Palmieri, owner of the 200-hectare (500-acre) farm, told AFP in an interview.

The dapper Palmieri, wearing a panama hat, a collarless linen shirt and loafers, is seen as a pioneer for environmentally sustainable buffalo dairies.

"They can't speak for themselves so it's up to us to understand how they want to be cared for," he said, sitting in a manicured garden next to his three stables, which house 500 buffaloes.

There's just one catch: If you want it, you have to drive to the farm, 50 kilometres (30 miles) south of Salerno, to buy it, as Palmieri does not bother with distribution -- or marketing, for that matter.

Business is brisk anyway, thanks to the dairy's word-of-mouth fame and international reputation among jet-setting buffalo milk aficionados.

Around 45,000 customers visited the on-site farm shop in August alone.

On a recent visit by AFP, dozens of cars were in the parking lot and a group of German tourists were touring the farm.

"You can really taste the buffalo milk. It's a bit far away, but it's worth it!" said one customer from Salerno, Anna Orzano, clutching her bag of ricotta and mozzarella.

The staple remains mozzarella but Vannulo also make a range of buffalo milk-based products including yoghurt, ice cream and, starting next year, chocolate.
A workshop on the farm even produces buffalo-leather handbags and belts, and Palmieri said he plans to open a restaurant serving up buffalo steaks.
Vannulo's "is widely regarded as the best mozzarella," said Piero Sardo, president of the Foundation for Biodiversity at Slow Food, an Italy-based international gourmet and eco-friendly farming group.

'Milk is not simple'

"The well-being of animals is an important issue," said Sardo, a cheese expert, although he admitted that the link between better treatment and tastier milk was scientifically "difficult to prove".

The history of buffalo dairying in Italy has been traced to the 12th century, but it remained a mainly local affair until relatively recently because of the difficulties in refrigerating the milk.

Before the 1980s, most dairies in the region were small producers like Vannulo.

But in recent years, buffalo mozzarella has gone international and is now prized in the best restaurants from Dubai to Moscow to Sydney.

The coveted cheese sells for 30 euros a kilo in Russia.

Expansion has brought problems too, including reports of large imports into Italy of buffalo milk from Central and Eastern Europe and the use of frozen or powdered milk.

But Domenico Raimondo, head of Italy's buffalo mozzarella consortium, which tries to enforce strict rules on the sector, said a return to the local market like Vannulo would be "anti-economic".

From Vannulo's stables, the porcelain-white milk is poured into large vats for curdling.

Its high water content is filtered off before a team of three workers begin transforming it into mozzarella.

"Milk is not simple, it is a living thing," said Donato Brinca, 46, chief cheesemaker, as he stirred the milk into a paste and kneaded it to make mozzarella.

"A good mozzarella needs to have a sweet taste and a hint of hazelnut," he said.

The lip-smacking result is a tough sell for the diet-conscious. Fresh buffalo milk is about 8.0 percent fat -- more than twice as much as cow's milk.

Palmieri, whose family has been rearing livestock for generations, conceded: "Buffalo mozzarella is definitely tastier, but it's not exactly dietary."