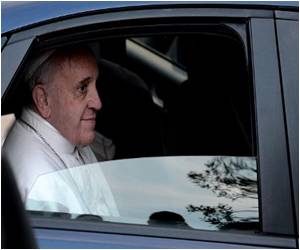 Pope Francis plans to offer prayers for Korean reconciliation in Seoul next week, but without expecting to be heard, as the country pays lip-service to religious freedom but treats unsanctioned acts of devotion as criminal.

The pope is scheduled to conduct a special Korean "peace and reconciliation" mass on August 18 at the end of a five-day trip to South Korea that will highlight the courage and sacrifice of early Catholic believers across the peninsula before its division.

While Catholicism has prospered in the South since the 1950-53 Korea War, in the North its presence is little more than a facade.


A recent report compiled by a UN Commission of Inquiry into human rights in North Korea concluded that practicing Christianity outside the state-sanctioned church amounted to a "political crime" in the country.
Advertisement
The basic policy is "a dual one through which an appearance of religious tolerance is maintained for the international audience while in fact religious activities are suppressed internally," it said.

The Vatican says there are no plans to visit the heavily militarised border, although spokesman Federico Lombardi stressed that the pope was "always capable of surprises."

His visit is expected to coincide with an upswing in bellicose rhetoric from Pyongyang which is furious at South Korea's refusal to cancel an annual military exercise with the United States.

The joint drill begins the same day as the pope's reconciliation mass, and North Korea has refused an invitation to send Catholic believers to the event in Seoul's Myeongdong cathedral.

Pyongyang's state-run Korean Catholic Association (KCA) has no ties with the Vatican and is often referred to as the "Church of silence" by Catholics in the South.

"There is no resident priest in the whole of North Korea, not even in the official church," said Gerard Hammond, a South Korean-based American Catholic priest who has been involved in aid projects in the North for more than 15 years.

There is one Catholic church building in Pyongyang, "but there are no confessions, baptisms ? no sacraments..." Hammond said.

A North Korean lay catechist runs the church, along with a few elders, and Hammond says the front pews were mostly taken up by "veiled women in black" who were probably mobilised by the authorities.

"No one knows who is a Catholic and who is not. And it is highly doubtful that the North Koreans attending the church are genuine Catholics," he said.

The KCA claims there are 3,000 Catholics in the country, while the UN estimates around 800.

Frequent visitors and rights groups say the closed nature of the North makes it impossible to provide a meaningful figure, although it is clearly a tiny community.

"There is no known underground church ? it's not like in China," Hammond said. "The population is smaller and the regime has much tighter control and everyone reports on each other so the risks are very high."

And a foreign passport is no protection.

A Korean-American missionary, Kenneth Bae, was arrested in November 2012 and later sentenced to 15 years' hard labour for seeking to topple the North Korean government.

Bae was described by a North Korean court as a militant Christian evangelist.

American tourist Jeffery Edward Fowle -- suspected of leaving a Bible in a nightclub -- is awaiting trial for unspecified "hostile acts."

In the early 20th century, Pyongyang was a regional missionary hub with scores of churches and a thriving Christian community that earned it the title of "Jerusalem of the East."

"North Koreans are largely unaware of this, but most founders of North Korea's communist movement like Kim Il-Sung were the sons and daughters of Protestant or Catholic believers," said noted North Korean expert Andrei Lankov.

For Kim Il-Sung, Christianity threatened his monopoly on ideology and had to be effectively eradicated, a goal he reportedly achieved with executions and labour camps.

The current regime allows Catholic organisations to run aid projects in North Korea, but direct relations with the Vatican are non-existent.

The Holy See does not recognise the KCA or Catholics in the North as legitimate members of the global church, although Hammond said some Vatican officials and clergy had said mass at the church in Pyongyang "for the sake of diplomacy."

"The government is very wary of the influence of religion and is aware of the Polish example and the role the church played in bringing down Communism," Hammond said.

Christian activists are known to be active along the Chinese border with North Korea, helping those who try to flee the country.

Most experts see little chance of any significant change in religious freedoms, unless the North implodes.

But people like Lee Eun-Hyung, a South Korean Catholic priest who has visited the North several times, sees no point in simply holding out for reunification.

"We can't just sit idly until that day comes," said Lee, who heads a Peace and Unity Centre the Church has built near the border with the North.

"We're studying ways on how to understand and approach North Koreans when unification happens," Lee said.

Source: AFP
Advertisement
<< Exercise Associated With Reduced Risk of Breast Cancer in A...
Skin Creams Containing Toxic Mercury Will be Out >>

Healthy Leisure and Being There for Family Key to Happiness: Pope Francis
Being with family and investing more time in 'healthy leisure' are two of the best ways of finding ....

Violence and Suffering in Iraq Causes 'Dismay and Disbelief': Pope Francis
Pope Francis calls for an "effective political solution" to a crisis which has forced thousands to ....