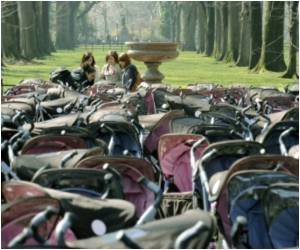 A newly discovered chemical fingerprint could yield a simple urine test to determine if a child has autism, according to a study released on Thursday.

Autism and related disorders affect up to six or seven out of every 1,000 individuals.

Symptoms are life-long and can vary widely, but often include impaired social skills, repetitive behaviours, difficulty in expressing one's emotions, and an aversion to physical intimacy. There is no known cure.


The factors leading to autism are generally present at birth, but the disorder is difficult to diagnose as it can be confused with other behaviour-related problems.

A new study by researchers in Italy has revealed that kids with autism see shadows differently from their counterparts.
Advertisement
At present, children are assessed through a lengthy process that tests social interaction, communication and imaginative skills.

A confirmed diagnosis is rare before the age of 18 months, and most often occurs much later.

A chemical marker would allow early diagnosis and could prove hugely helpful in getting a head start on treatment, the researchers said.

"Giving therapy to children with autism when they are very young can make a huge difference to their progress," said lead researcher Jeremy Nicholson, a professor at Imperial College London.

"A urine test might enable professionals to quickly identify children with autism to help them early on," he said in a statement.

Such a test, he cautioned, would probably take several years to develop.

Surprisingly, the key to the chemical fingerprint is found in the digestive tract.

People with autism typically suffer from gastrointestinal problems stemming from a different bacterial makeup in the gut.

The study, published in the Journal of Proteome Research, found that the way in which the body metabolises these unique intestinal flora creates a chemical signature in urine.

Using spectroscopy, Nicholson and colleagues from the University of South Australia analysed the urine in three groups of three-to-nine year olds: those diagnosed with autism, non-autistic siblings of children with autism, and a control group with no history of autism in the family.

Each group had an internally consistent chemical fingerprint that was, at the same time, distinct from the other two.

American researchers have identified a drug that improves communication between nerve cells in a mouse model of Phelan-McDermid Syndrome (PMS).
Advertisement
Advertisement

Bacterial infection of urinary bladder can cause pain and burning sensation while passing urine. Abnormal ...