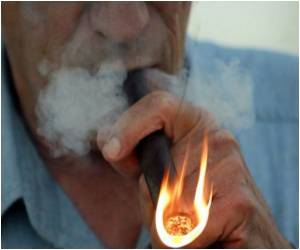 In 2011, worldwide sales of luxurious Cuban cigars scaled to 9 percent with revenues of $401 million following an upturn in the market, executives of Habanos S.A. said on Monday.

On the opening day of Cuba's 14th Cigar Festival, organizers stressed how important these results are amid the economic woes afflicting their main European markets and the spread of restrictions on smoking.

Habanos S.A., founded in 1994, is a mixed company with equal participation by state-owned Cubatabaco and the Spanish corporation Altadis, a subsidiary of the Imperial Tobacco Group PLC.


The company's vice president for development Javier Terres and marketing director Ana Lopez told a press conference that the corporation has held onto its 80-percent share of the international market for hand-rolled cigars.

Tobacco use in women is on the rise. The health risks of tobacco are far too many has never done a woman any good psychologically or health-wise.
Advertisement
Habanos currently purveys such exclusive brands as Cohiba, Montecristo, Romeo y Julieta, Partagas, Hoyo de Monterrey, H. Upmann and Punch to 150 countries.

Some 53 percent of sales are in western Europe, followed by the Americas with 15 percent and the Asia-Pacific region representing 13 percent.

Habanos executives said that in seeking to maintain sales, the company is trying to adapt to the new circumstances, so that smokers can "identify" where to find a quality Cuban cigar and shorter cigars are being designed for places where smoking is restricted.

Terres said that China is Asia's most promising market with double the sales it had three years ago.

As for knock-offs of its star products such as Cohiba, Lopez said the company is trying "to limit to the maximum" illicit activities by means of "systematic tracking", which in 2010 allowed it to detect more than 10,000 fakes under Cuban brand names.