Snacking Based on Emotions Begin Early in Preschool 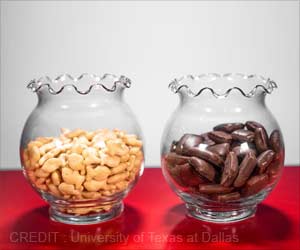 Children who are sad eat more chocolate than those who are happy. Emotions influence the food habits and they begin early in childhood, finds a recent study.

Dr. Shayla C. Holub, head of the psychological sciences PhD program and associate professor in the School of Behavioral and Brain Sciences, demonstrated that children from 4 to 9 years old chose chocolate candy over goldfish crackers more frequently in response to both happiness and sadness.

Advertisement
‘Children eat in response to both happy and sad emotions, but more for sadness.’

Her paper, "The effects of happiness and sadness on children's snack consumption," was recently published online in the journal Appetite. It was co-authored with Dr. Cin Cin Tan, research faculty at University of Michigan's Center for Human Growth and Development, who completed her doctoral dissertation on the topic with Holub at UT Dallas.


Their study showed that when presented with four snacking options, sad children ate more chocolates than the happy children, who in turn ate more chocolates than the neutral group. Conversely, for the goldfish crackers, the neutral group ate the most, followed by the happy children and the sad children.
Advertisement
"It was nice to see that there was this hierarchy," said Holub, who used clips from Disney's The Lion King to create happy, sad and neutral cohorts of children. "The kids watching the saddest video ate the most chocolate. There was a significant drop in consumption among the ones watching the happy video, but they still consumed more chocolate than the neutral video group. This suggests that children eat in response to both happy and sad emotions, but more for sadness."

The study's results also show that these tendencies increase with age, which suggests to Holub that it is at least in part a socialized behavior.

"This is one of a very few experimental studies on emotional eating in young children," she said. "What we're learning is that it's sometime during the preschool period that children are developing these eating habits. For example, you go to birthday parties and experience positive emotions -- everyone has fun and gets candy or cake. And at holidays, it's all about the food. Children begin to associate food with certain feelings."

Holub, the 2015 recipient of the Aage Muller Teaching Award at UT Dallas, explained that children begin with a strong ability to consume the right amount of calories for their energy needs.

"Very young kids are really good at regulating their food intake," she said. "If you change the energy density of a baby's formula content, the child adapts his or her food intake in response. If you give preschoolers a snack, they will adjust their meal intake to react appropriately so that they are not too hungry or too full. They know their own body cues."

"If the portion that is on my plate is what I'm supposed to eat, I'm going to force myself to eat it," she said. "Restrictive feeding practices also seem to be problematic -- telling children they can't have something makes it a preferred food, and when they gain access to it, they immediately eat more of it. That's another way that children learn to stop listening to their internal cues."

The latest study built on earlier work by the duo showing that parents teach emotional eating behavior both by example and through their feeding practices.

"In 2015, we published one of the first studies to find that it's not only that the behavior is being modeled for a child seeing a parent turn to food when they're sad, for example, but that it sometimes also might be that parents feed children in emotion-regulating ways," Holub said. "Your child gets upset? Here's a piece of candy. Are you bored? Here's something to eat."

Holub emphasized that while these trends don't indicate that habits can't be modified later, ages 3 to 5 constitute a crucial time in which some children lose their ability to self-regulate.

"If we can learn how to nurture healthy habits early on, that makes us less likely to have to eliminate negative behaviors later," she said. "The idea is to set up healthy trajectories and communicate with our children about how to choose healthy options."

Best Gift for Your Valentine: Good Health
February 14th marks Valentine's Day, a special day dedicated to your loved one. Here are some tips ....