In a major step towards faster and convenient delivery of medical tests, a low-cost, portable laboratory on a smartphone has been developed by Washington State University researchers, that can analyse several samples at once to catch a cancer biomarker, producing lab quality results.

At a time when patients and medical professionals expect always faster results, researchers are trying to translate biodetection technologies used in laboratories to the field and clinic, so patients can get nearly instant diagnoses in a physician's office, an ambulance or the emergency room.


‘Although smartphone spectrometers exist, they only monitor or measure a single sample at a time, making them inefficient for real world applications.’


A spectrometer analyses the amount and type of chemicals in a sample by measuring the light spectrum.

"The spectrometer would be especially useful in clinics and hospitals that have a large number of samples without on-site labs, or for doctors who practice abroad or in remote areas," said lead researcher Lei Li, Assistant Professor in the School of Mechanical and Materials Engineering.

"They can't carry a whole lab with them. They need a portable and efficient device," Li noted. Although smartphone spectrometers exist, they only monitor or measure a single sample at a time, making them inefficient for real world applications.

The multichannel spectrometer can measure up to eight different samples at once using a common test called ELISA that identifies antibodies and colour change as disease markers, according to a study published in the journal Biosensors and Bioelectronics.

"With our eight channel spectrometer, we can put eight different samples to do the same test, or one sample in eight different wells to do eight different tests. This increases our device's efficiency," said Li, who has filed a provisional patent for the work.

Although the system currently works with an iPhone 5, the researchers said they are creating an adjustable design that will be compatible with any smartphone. 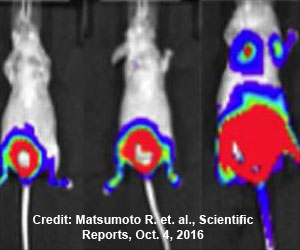 Oncogene 'MDM4' Plays a Critical Role in Cancer Cell Growth in Retinoblastoma
The MDM2 oncogene plays a critical role in promoting expression of the MYCN oncogene that is required for growth and survival of retinoblastoma cells.
READ MORE