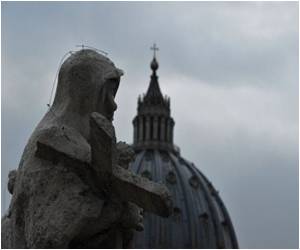 Young men and women eye each other timidly as the priest nudges them to have a talk over a cup of tea and cookies.

It is the fifth monthly "mass for singles" at Our Lord's Ascension Church in Warsaw, one of several such initiatives across heavily Catholic Poland at a time when loneliness is on the rise and faith is waning.

"Core values are falling by the wayside right? I mean you definitely can't find a potential wife at a nightclub," said 30-year-old Krzysztof Merchel, a first-timer who drove down from the central village of Chotomow with two friends acting as wingmen.


Scoping the room packed with around 250 twenty- and thirty-somethings, the welder says all the solitude around makes events like this one a no-brainer.
Advertisement
"Except tonnes of people hide it right? Many are lonely and they just don't know what to do about it," he said amid the din of chitchat and laughter.

The singles mixer is the brainchild of 34-year-old doctor Matylda Krzysiak, a parishioner who lobbied the church for four years before the new parish priest gave it the thumbs up.

"People are generally spending their time on the web. There's a lot of isolation. And everyone's overworked," said the stylish and single blonde.

The soiree starts with mass, including a special sermon -- on jealousy or women made in the image of God or communication pitfalls -- and prayers for a good husband or wife. Believers then leave the pews to mingle in another room.

At least three churches hold singles mass in the capital, along with others in the southern city of Krakow for example or Olsztyn in the north.

Churchgoers have been pairing off for ages, but special services for singles is a new formula for the church at a time when its influence is no longer what it used to be, says Warsaw sociologist Pawel Boryszewski.

"There are various competing offers and now the church is trying to give it a name, to make it easier for people. Are you lonely? Then here: mass for the lonely," he told AFP.

Poland is among Europe's most devout countries but while over 90 percent of Poles identify themselves as Roman Catholic, ever fewer are heading for the pews on Sunday.

Since 2005 the number of non-believers has risen from three percent of the population of 38 million people to seven, according to the CBOS institute, which ran its latest survey this year.

"There's a lot of church-bashing," said Krzysiak, pointing down her throat in a gesture of disgust to show how some see the institution.

She says sceptics see singles mass as just another ploy by priests to fill offering plates with money, but she stresses that at her church the event is free and was a parishioner initiative.

Father Aleksander Jacyniak, 54, who runs the meet-and-greet at the Jesuit Church in the heart of Warsaw's old town, says his predecessor launched it after spotting a pattern among young people at confession.

"They finished school, found themselves a job, already have an apartment, basically have their ducks in a row -- but they don't have a wife or husband," said Jacyniak, who centred his sermon around the popular self-help book "Why Am I Afraid to Love?"

Official statistics here show the number of single women aged 15 and up -- discounting the divorced and widowed -- rose from around 18 percent of the population in 1988 to 23 percent in 2011.

"I'm one of those folks who feel emptiness somewhere inside," said Ewelina Andrejczyk, a friendly 20-year-old with rainbow-coloured hair.

The shy agriculture student did not find her other half among five dozen singles in the cavernous church basement last month, but Jacyniak says sparks do fly. Several pairs have walked down the aisle.

Law student Tomasz Olejek, who went as moral support for his single-and-looking friend, said he found his own gal pal by chiming in during post-mass chatter outside the church.

"I looked for a lady on the Internet for around eight years. Nothing. And then I met my girlfriend in the real world," the 23-year-old told AFP.

"That's why I think you need to just leave the house and look."

Gay Ministers Voted In By Church of Scotland
Following years of debate between the liberal and traditionalist sides of the church, the Church of ...