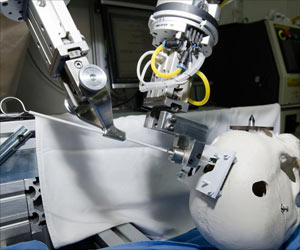 A robot massage therapist knows exactly what kind of personalised massage you need. A technology start-up in Singapore has designed a robot masseuse that specialises in back and knee massages.

Named Emma, short for Expert Manipulative Massage Automation, the robot mimics the human palm and thumb to replicate therapeutic massages such as shiatsu and physiotherapy.

Advertisement
‘Emma uses advanced sensors to measure tendon and muscle stiffness, together with Artificial Intelligence (AI) and cloud-based computing to calculate the optimal massage and to track a patients recovery over a course of treatments.’

Built by AiTreat, a start-up incubated by Nanyang Technological University (NTU), and developed over about two years, Emma massages with soft silicon tips that are warmed to a temperature of between 38 deg C and 40 deg C to mimic human touch.


Emma begun working at NovaHealth Traditional Chinese Medicine (TCM) clinic at One Raffles Place, doling out back and knee massages, with pinpoint precision and efficiency.
Advertisement
Emma was officially launched at the clinic's opening on Monday (Oct 9). It consists of a robotic arm extending from a white machine that is able to provide massages. Unlike most other practitioners she has only one arm, and it is made of metal. Her two "palms" consist of soft silicon that can be warmed for comfort, and her conversation is non-existent.

According to her designers, a session with Emma is almost indistinguishable from one provided by a professional human masseuse. Inderjit Singh, chairman of Nanyang Technological University's innovation and enterprise arm, NTUitive, said: "There is great potential for Emma to be of service to society, especially as the population ages.

To set Emma in motion, the physician just needs to spend a brief five minutes to mark out the patient's acupoints on a computer that is attached to the robot. It is tasked to massage the knees and backs  the only two problem spots it is able to tackle for now  while the therapist focuses on the neck, ankle or wrist massages.

Robotic System Monitors Specific Neurons
A way to automate the process of monitoring neurons in a living brain using a computer algorithm ......

Lightweight, Soft Robotic Ankle Supports Help Patients Walk After Stroke
Stroke is the third leading cause of death after cancer and heart disease, but the majority of ......

RoboLog Can Track Robotic Training Progress of Physicians
RoboLog, a new system developed is a tool, which improves reporting of robotic surgeries performed ....

New Robotic Tool to Improve Recovery in Stroke Survivors
A new robotic tool could assess the muscle overactivity and movement dysfunction to improve ......