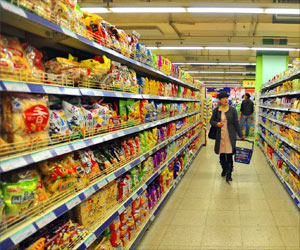 Simplified nutritional packaging can help consumers make wise choices in purchasing healthier food at grocery stores. If people have to look at a single number that represents the nutritional value of the food, they are more likely to buy healthier products.

The study, "Healthy Choice: The Effect of Simplified Point-of-Sale Nutritional Information on Consumer Food Choice Behavior," co-authored by Hristina Nikolova, the Coughlin Assistant Professor of Marketing at the Carroll School of Management at Boston College and J. Jeffrey Inman, Associate Dean for Research and Faculty and the Albert Wesley Frey Professor of Marketing at the University of Pittsburgh Joseph M. Katz Graduate School of Business. The study involved more than 535,000 shoppers, eight different food categories, and a major grocery store chain that utilized the NuVal (short for Nutritional Value) simplified scoring system.

The Food and Drug Administration has urged food manufacturers to express the amount of sugar in teaspoons as well as grams for people to understand better.
Advertisement
‘A single nutritional value score on food packages allows consumers to identify the healthier products and make wise choices.’


The NuVal System scores food products on a scale of 1 to 100 - the higher the score, the better the nutrition. It was developed by a team of nutrition, public health, and medical experts after the 1990 Nutritional Labeling and Education Act (NLEA) failed to reduce the nation's obesity rate and is currently available in more than 1,600 stores in the US. NLEA mandated nutritional labels list ingredients such as fat content, sodium, calories, carbohydrates, etc. While well-intentioned, the labels "are somewhat difficult and time consuming to understand," according to the study, because shoppers look at the product packaging and have to "combine all the information into an overall evaluation."

Restaurants and other businesses need to tell customers if their food could trigger allergies or raise other health concerns in a new EU labeling rule taking effect on Saturday.
Advertisement
Researchers cite a 2012 Nielsen study that found 59% of grocery shoppers experience difficulty in understanding nutritional facts on product packaging.

"Our study indicated that the NuVal nutritional scale had an immediate and powerful impact on shopper's decisions," says Inman. "They changed their purchasing behavior to pick healthier choices and they switched to higher-scoring products. In fact, the simplified nutritional information boosted healthy choices by over 20 percent."

Researchers worked with the grocery store chain that began implementing the NuVal scoring system in its stores in 2008. The chain provided dates for when the NuVal scores were introduced for the eight food categories examined - frozen pizza, tomato products, soup, salad dressing, yogurt, spaghetti sauce, granola bars, and ice cream. The study compared purchases of more than 535,000 frequent shoppers in the six-month pre-rollout period and the six-month post roll-out period.

"Thinking about the limited time that you have to go and do your grocery shopping, you don't have time to pick up every product, look at the label, take another product and compare the labels on all the different ingredients so it helps with that as well - it facilitates the shopping," says Nikolova.

Given the ease of use, and America's increased focus on health, the study found consumers using POS nutritional scoring systems tended to gravitate toward products with higher nutritional scores, regardless of the price. In fact, price sensitivity in the grocery chain the study examined decreased by 19%, while overall sales increased.

Additionally, researchers found that although consumers were paying less attention to price, they actually paid more attention to a store's promotions.

"Our study also revealed that shoppers became less price-sensitive and more promotion-sensitive following the introduction of the food scoring system," says Inman. "The new nutrition scores help to justify the price. This means that grocery stores were able to create a win-win by helping their customers make healthier choices, while also increasing sales at their store."

"Instead of thinking about reducing prices as a way to increase sales, stores can think about highlighting their promotions in the store," says Nikolova. "After the introduction of a POS simplified nutrition scoring system, shoppers start paying more attention to nutrition and they have less attention to devote to other factors in their shopping decisions, such as price for example. They are then looking for shopping heuristics that would save them mental energy - anything that makes their decisions easier. Promotions, which are usually prominently highlighted in the store, are one such heuristic. Thus, shoppers become more sensitive to promotions." The study's authors say not only should the rest of the nation's approximately 37,000 supermarkets consider POS nutritional scoring implementation, but the U.S. government might want to consider a new standardized nutritional scoring system.

For now, the study's message is aimed at creating healthier choices for consumers and a healthier bottom line for retailers.

Putting calories and fat content on the label on various foods purchased produces a 7% reduction of mean total calories and total fat purchased per week.
Advertisement
<< Stuck Up With Your Daydream? Beware It may Trigger Depressio...
Study Finds Link Between Self-Reported Penicillin Allergy An... >>

It is not always easy to decipher nutritional information in a food package.