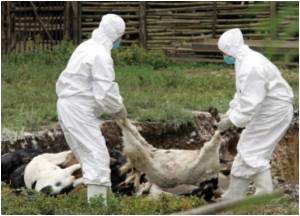 Costs of animal disease outbreaks would increase sharply with urbanization and a growing demand for animal products, warned the UN's Food and Agriculture Organization on Monday.

"We are expecting the costs to human, animal and plant health of these pathogens, and their overall economic costs, to rise substantially over the next decades," Juan Lubroth, FAO's Chief Veterinary Officer said in a statement.
Advertisement

With more than half of the world's population now living in cities, urban areas are sprawling closer to intensive farming operations, while at the same time, the consumption of animal products is on the rise.


More than 21 billion animals were raised for food in 2008, a figure that FAO believes by 2020 will grow by more than half, as demand for animal products rises in East Asia and other parts of the world.
Advertisement
"The threats are very real. Deadly and economically devastating livestock epidemics have existed throughout history but there is no doubt that more pathogens are emerging - and spreading," Lubroth said.

"Governments could save billions of dollars by stepping up the prevention and control of high impact animal diseases, some of which pose a direct threat to human health," FAO said.

Along with the World Health Organisation, FAO has launched and is seeking funding for a five-year initiative aimed at detecting and fighting animal disease outbreaks with particular emphasis in Asia, Africa, Latin America and the Caribbean.

Deadly Animal Diseases Poised to Cross-over to Humans
Warning bells are ringing against the rising threat from new diseases passing from animals to ......

Scientists Learn How Probiotics can Prevent Disease
Scientists have now discovered how probiotics successfully work in fighting against a number of ......

Portable Diagnostic System for Bird Flu, Foot and Mouth Disease to Be Launched
Smiths Detection has announced of launching portable detection system to carry out on-site ......