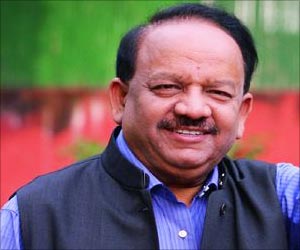 Union Health Minister Harsh Vardhan has advocated a ban on sex education in schools on his personal website drharshvardhan.com.

This is the second time that the minister generates a controversy on the sensitive topic of sexuality in India.


Earlier, the minister had set in a heated argument by commenting to New York Times that to prevent AIDS, fidelity should be encouraged more than emphasizing the use of condoms.


The doctor-turned-politician, Harsh Vardhan, had expressed his views in his "vision" document for Delhi schools in the run-up to the Delhi elections 2013 when he was contending for the post of chief minister of Delhi as a BJP candidate. The document read ""So-called 'sex education' to be banned. Yoga to be made compulsory."

His views also included laying strong emphasis on exposing students to India's cultural traditions and encouraging musical training together with dance and drama.

Vardhan was unable to be contacted since he is in the US, and his office said the comments were the minister's own personal views.

Delhi BJP spokesperson Sanjay Kaul said the issue of banning sex education in schools had not been discussed on the party forum and they had no comments to offer.

Public health activists are infuriated at the views of the health minister.  Some of them labelled this as an attempt to push RSS agenda.

Statistics point to a surge in the premarital sex in cities, which is an estimated 75% in the age group of 18-24.  In this scenario, it becomes absolutely necessary to impart vital information about sexually transmitted diseases and contraception in children.

"Children are attaining puberty at very early age these days. By the age of 12-13 years, many children are sexually mature and several teens are also sexually active. In such a scenario, it would be idiotic to turn a blind eye to reality. Not only should parents speak to their children about sex and the implications and responsibilities arising from it, schools too should play an active role in imparting sex education to students," stressed an activist.