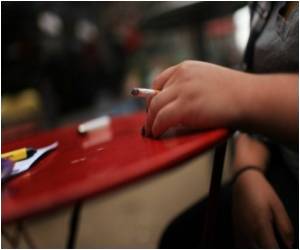 Exposure to second-hand smoke has a direct impact on the brain and stimulates nicotine cravings among smokers, reveals study.

The study used positron emission tomography (PET) to demonstrate that one hour of second-hand smoke in an enclosed space results in enough nicotine reaching the brain to bind receptors that are normally targeted by direct exposure to tobacco smoke. This happens in the brain of both smokers and non-smokers.


Previous research has shown that exposure to second-hand smoke increases the likelihood that children will become teenage smokers and makes it more difficult for adult smokers to quit.

Approximately half the smokers die due to smoking -related diseases. But it is not just the smokers who are at the receiving end. The passive smokers too, often pay a heavy price. If you still have not 'kicked the butt', learn more horrifying facts about smoking by participating in the following quiz.
Advertisement
Such associations suggest that second-hand smoke acts on the brain to promote smoking behaviour.

"Chronic or severe exposure could result in even higher brain nicotine levels, which may explain why second-hand smoke exposure increases vulnerability to nicotine addiction," she stated.

Arthur Brody, M.D., of the UCLA Department of Psychiatry and Biobehavioral Sciences and corresponding author for the article, said the study gives concrete evidence to support policies that ban smoking in public places, particularly enclosed spaces and around children.

The findings have been published in Archives of General Psychiatry.

Smoking And Tobacco
News Archive
News Resource
Advertisement
News Category
Why Do Astronauts Lose Bone Density? Can Carbon Monoxide Help Fight Inflammation? Can the Monkeypox Virus Spread Through Surface Contact? How Did the Baby and Womb Connection Develop in Mammals? Is Drought Associated With Increased Diarrhea Risk
More News
Sign up for Wellness Consult a Doctor Sign up for Selfcare